As I looked down at my red dust-covered boots and wiped my sweaty brow with my sweaty hand, I pondered about the journey ahead. It was a long, narrow, and very un-maintained road. I heard Emmanuel (the outreach coordinator at KITA) say “this way, this road goes to Kokoben”. I responded with “lets do this”. He chuckled. For the past two weeks we had been working tirelessly on getting local schools to let us come and meet with the head master and mistress about 4H and invite them to an advisor training. Ghanaians are big on protocol, when convenient or inconvenient. The
process that this took required writing letters, contacting and visiting district offices, and going to schools to meet with the appropriate people. 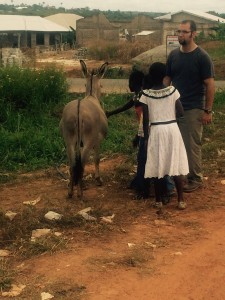 Thirty minutes of walking later, I could finally see the junior high school about 200 yards ahead. I cracked a smile as I exhaled. Unfortunately, my small victory abruptly ended when Emmanuel slapped my shoulder and motioned us to run. I obeyed his command without thought. It wasn’t until I looked behind me and saw a giant supply truck barreling up the hill, quickly gaining on us. We ran. As we approached the grassy field of the school, all the children on their break cheered for us. They enjoyed watching the spectacle of the white man and his local friend being chased by the large truck. Upon finding the headmistress’s office, we were greeted like normal; polite and welcoming. I was confident at
this point because the first four schools we went to were a success. All the teachers and administration were excited about 4H and wanted to go to the training. As I handed the letter to Madam I knew this was going to be different.

She read the letter out loud. That was new. Before I could even explain our cause, she looked over the top of her glasses and asked “has our district office been notified?” I said “yes Madam” and then she replied “Good, then get a memo of approval from the district office and we will think about it”. She then very sternly stared at us, wordlessly stating that the conversation was over. Emmanuel and I looked at each other and with out saying a thing I knew we had the same thought, “well what the hell do we do now”. Before I had a chance to charm Madam, she looked at me, slowly blinked and then spoke to Emmanuel in Twi ( the native language). Later, I found out that she asked if the two of us walked here. Emmanuel responded with a “yes Madam we have walked to all the schools”. She questioned him further with “you telling me the Obroni walks!?” (Obroni is slang for white person. Usually when a “white man” comes from an NGO they hire a driver or use so form of motor transportation.) After her response, Emmanuel chuckled and confirmed her question. She looked at me again and in English started asking a few questions about 4H. As the conversation continued I found all three of us out in the back field of the school where the madam explained where she wanted to put a school garden. She elaborated on how they needed fencing because the local goats (yes local goats) will eat everything. As we finished I thought “ok maybe she had a change of heart and won’t worry about the district’s memo”. However, as we said our goodbyes, my optimism quickly evaporated. I tried to close the sale by saying “so we will see you at the training” and she responded “once I get that memo”. 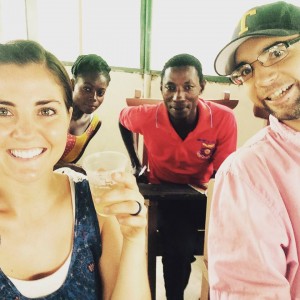 I was DEFLATED, and I could tell that Emmanuel was too. We said goodbye one more time and then sat on the ground, waiting for a cab to take us back to KITA our starting point. As we climbed in and started to pull away from the school, I heard kids shouting in Twi. Then, amongst all the yellow and maroon uniforms, I saw a bright colored dress walk through them, parting the group as if it were the Red Sea. She motioned towards me. I stopped the cab and went over to her. She told me that she spoke with the district and they would like to come to the training! Although I was a bit confused about her change of heart, I smiled and told her “thank you!” Emmanuel and I silently celebrated on the way back to work, and at one point, he slapped my leg and muttered in English with a smile, “The Obroni Walks!”