A congregation of 4-H members were eagerly leading and following me through the small dirt trails of my new village, when I asked them to stop for a second. I stepped toward a group of small children about twenty feet away happily playing under a tree, just to say hello and acknowledge them. As soon as I took a step toward them, their happy faces turned to fear and they quickly ran away. Not just kind of scurried off, but in full fright they took off screaming. The older 4-H members around me giggled at the children’s innocent terror. I felt awful that I scared them and asked the members beside me if there was something I could say to let them know it was okay.

Then I noticed. There was one girl who was still standing under the tree. Her size lead me to believe she was around the age of two or three, and she looked at me with no fear and a subtle curiousness. As if she were testing her own strength, she stood their looking at me without moving a single muscle. 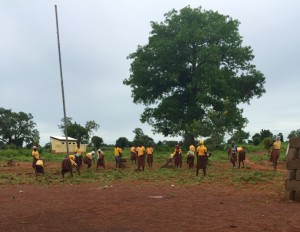 So I continued toward her.

As my dusty Tony Lamas struck the red dirt about five foot in front of her, all of the 4-H members circled behind me. I then slowly squatted down to say hello. Sweat was profusely starting to spread through the threads of my Columbia button down, as the hot African sun was scorching down in the Savannah of North Ghana. Her body language was calm, and I could tell she was strong. Not strong as in could lift a car, as she was clearly malnourished, but strong as in her will and stamina.

Her small dingy pink shirt that hung off her left shoulder and yellowish shorts seemed to had been passed down from her older siblings and washed by her mothers hands a thousand times. She wore no shoes on her dirty feet and was naturally unaware of her parents whereabouts. Because all rural children have short hair or shaved heads, the small gold hoop earrings in her ears were to signify she was female. Her big brown eyes were fixed on the uncertainty of my presence, so after a couple seconds I extended out my arm and opened up my long fingers to her. Worried I would scare her, I again asked if there was something I could say to comfort her. Immediately a 4-H member beside me, Awalatu, said a phrase in Dagboni. Without questioning the meaning, I repeated the phrase the best I could. 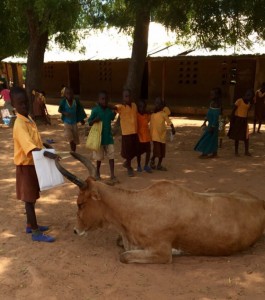 Completely willing, the little girl took a step forward. So in response to her step, I reached my hand out a little farther.

That’s all it took. As if my inching nearer were the final invitation, she unhesitatingly touched my fingers, then put her small dark hand in my pale white palm. The curiosity within her soul was finally brave enough to do it. She suddenly grinned and looked at the kids behind me, as if she was so proud of herself for grabbing my hand, yet shocked that some magic sparkles didn’t pop out at my touch.

After a few seconds of holding my palm and exchanging smiles, I stood back up and waved goodbye. She shyly waved bye, then spun off with excitement as to tell all her friends what had happened.

In my mind, I just got to meet a cute little girl in the village, but it wasn’t until we were walking back that I discovered another significance.

As we were walking away, all the 4-H members were excitedly talking amongst themselves in Dagboni about my arrival, and every now and then asking me questions about myself in English. Then a girl next to me explained what had happened.

“The children will be scared of you,” Awalatu proclaimed as we were walking back from my tour of the village.

“Why’s that?”, I curiously replied.

“They’ve never seen a white person in real life. They don’t understand your skin, so it scares them. We were all surprised to see that she didn’t run away and actually listened to you tell her to come forward. (This is the first time I realized what phrase I repeated in Dagboni).

“Yes, she’ll tell her friends she touched a siliminga and they probably won’t believe her.”

I kind of laughed and assured them that there is nothing scary about me, and I’m human like they are. 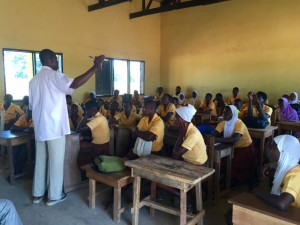 As I sit in my new home alone, I can’t help but grin and think about the courage and strength the little girl had to let her curiosity win over her fear by coming to shake my hand, today. It’s a commonality we both share. It was strong will, faith, and curiosity that brought me to Ghana; just like it brought that little girl to stay, even though everybody else was running away. I pray that she keeps her sense of wander even when she’s grown, and keeps her strong will to face things and make a positive difference, just like I’m trying to do.

Her brave touch of my hand reminded me that it’s so easy to be scared and run, to quit wandering and asking questions, but it terrifies me more to think what I would have missed out on if I hadn’t taken this opportunity with AgriCorps.

Kelsey Barnes is an Agriculture Science graduate from Mississippi State University. Before becoming an AgriCorps Member, Kelsey interned as a crop and soil consultant.