It was 12:35pm on a Saturday. I stood in front of an almost empty classroom. A meeting had been scheduled for noon that day. I had expected about 15 students to show up, so we could discuss their personal square-meter gardens and I could happily give them the onion and tomato seeds I had brought with me. Instead, I was looking at a classroom with only 2 students sitting amongst the otherwise empty desks. *sigh* 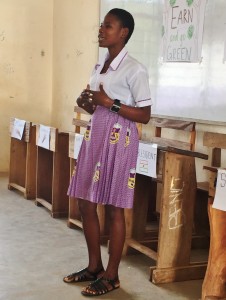 The next Tuesday, I once again found myself in a classroom filled with empty desks. I looked down at my notebook, where I had a list of 10 names written under “4-H Garden Tour Committee”. Despite the many reminders and printed calendars, I looked up and saw only 3 students standing in front of me. A disappointing turnout…*sigh*

Thursday morning, I walked out of my house and towards the school where I had a 10 o’clock meeting with some students who had signed up to compete in the upcoming public speaking contest. While I strolled down the dirt path, I prepared myself to enter yet another classroom full of empty desks; it was what I had come to expect.

When I entered the classroom, I was pleasantly surprised to find all 7 students who had signed up sitting at the front of the room. I greeted the students and told them to get out their papers on which I had written the speaking parts they needed to memorize. None of the students moved. Thinking I had spoken too fast, I repeated the directions slowly. One student raised his hand, “Madam, we do not need the papers. We know the parts.” Although I had only given these students their speaking parts the day before, they had completely memorized them and were able to recite them without assistance. Our meeting ended with an excessive amount of high fives and fist bumps. 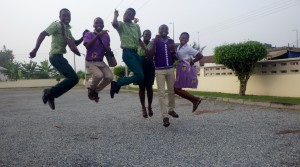 Later that week, I was in my house when I heard a knock on the door. “Madam, we want to show you our gardens,” said the students standing outside. These were the same students who had come to the Saturday meeting where I had given them seeds. I followed them to the edge of the school field where they had constructed “goat-proof” square-meter gardens. The students had tilled the soil, built durable fences around their plots and created shade for the new seedlings out of palm branches. Again, high fives all around.

Also during that week, one of the three proud members of the fencing committee approached me between classes. He had collected scrap wood from old desks and researched the cost of paint in preparation for building signs to install in our 4-H Club Garden. Needless to say, that kid got a high five.

It has occurred to me just how much time I spend 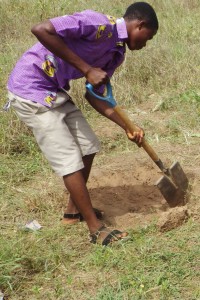 So this is my resolution: Stop looking at the empty desks. Turn your attention to the small number of people filling the desks at the front of the room. They are the reason I am here. In the words of Margaret Mead, “Never doubt that a small group of thoughtful, committed citizens can change the world; indeed, it’s the only thing that ever has.”

Lyndee Lum is an International Soil and Crop Science graduate from Colorado State University. Before becoming an AgriCorps Member, Lyndee raised livestock and was a state FFA officer.