I stood there on a mound of blood red soil overlooking Chief John’s farm. No large buildings were in sight. As a matter of fact, no other people were in sight. There were no other signs of human life as Anna, Bindu, and I looked out over the surreal landscape. Light green hills covered by rice seemed to go down like steps to what I could only assume was a stream that was hidden by shades of dark green coming from the palm, banana, coconut, and other bush trees. The mixture of green was met at the horizon by a grey, cloudy, and expressive sky. It was one of those skies that would have been perfect for a good cloud gazing session. However, there was no cloud gazing going on because the whole picturesque landscape was too amazing, too beautiful, too new-to-me to be able to focus only on one part. So we sat and just admired while we waited for Chief John and his wife to meet us on the mound by the farm kitchen.

While we were perched with the best view of the farm I took stock of the crops being grown. It was a typical 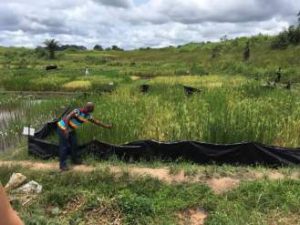 Liberian farm: small, seemingly cut out of the bush, and most of the ground was used to grow rice and cassava. Within the rice field there were cucumber and pumpkin (not exactly like U.S. pumpkins) plants interspersed and at the edge of the farm where we walked through to get to the kitchen was a fenced in plot of peanuts. Over the few days that we had already spent in the little village of Kamada town, I had learned that rice and cassava were the major staples in Liberian cooking, and therefore Liberian agriculture as well. When I say that they were major staples, I mean that I was told that if you didn’t eat rice yet during the day “than you didn’t eat.” Cassava was not too far behind in that thinking.

While perched on Chief John’s farm, one of God’s masterpieces in front of me, I realized that the average Liberian farmer was doing all they could to survive with century old practices and century old seed varieties. I had met and lived with a village of farmers that were great people, treated me like their own, and impressed me by the joyful way that they lived life, but they were missing access and knowledge of modern-age farming techniques.

While I stood amongst the rice paddys at CARI, impressive as it was beautiful, I realized that Liberia had the answer to their old-age farming problem. The CARI scientist that was teaching me about their research rice paddy was intelligent, passionate, vibrant, and hopeful. He had a vision for a bright future, for himself and Liberia, and it became clear to me as well. He was the answer. He and the people of this country are no different than any other human being (including yourself) that gets kicked down. You get right back up, stand up straight, and hold your head high. No need to seek retribution against the people or things that tripped you up. Retribution won’t ever be enough because the times when you were down will always be there to stare you in the face. But standing upright once more is enough. Standing in community, united and proud, and realizing that God’s grace redeems and fulfills you so much more than you could ever redeem yourself. “By His Spirit I’m alive from the ashes of defeat. The resurrected King is resurrect in me.”

When we are tripped up and fall flat we all have the ability to turn around and be strong. The person standing in front of me at CARI that day is one of the many Liberians that have the heart to pick themselves, and a country, up off the dirt, dust themselves off and keep moving forward. They didn’t need me or any other AgriCorps or Peace Corps volunteer to swoop in to save the day. The answer was right there in the heart of that Liberian CARI scientist, just as it is in the hearts of so many other Liberian’s I’ve already met.