It was the first week of term 3 and after a long break from school, I was anxious to get back into the classroom and start teaching. What I had come to learn however, is that much of the first couple weeks at the start of each term is spent simply waiting around for students and masters to report to school. Finally, by Wednesday I decided I would stop by each of my classes and see how many of my students had reported. If we had the majority, I would begin teaching. If not, I would wait.

I was disappointed to find that in each of my three classes, there were less than 15 students (in a class of 65-75 students) in each classroom. When I entered the third and final classroom there were only about 10 students and I decided to stay and chat with them since it was clear that no formal teaching would be happening that day.

I was standing at the front of the classroom, conversing with my students when I noticed one student, Saeed, leaning far back in his chair just staring at the ceiling. I kept talking with the other students, but Saeed continued to stare blankly at the ceiling. This was an odd behavior for him, as he normally is a very animated, lively student who regularly participates in classroom discussion. Not only that, but Saeed will frequently stop by my house in the evenings and on the weekends just to chat and hang out. Something was wrong, I could tell.

I pulled up a chair across from Saeed and tapped him lightly on the shoulder. “What’s up Saeed? You are not yourself today.”

Saeed finally pulled his eyes from the ceiling and looked at me. There were tears in his eyes. “Madam, the chemistry exam. I…” his voice broke and he put his head in his hands.

“What happened?” I asked, waiting patiently for him to explain.

Instead of offering an explanation, Saeed reached into his bag and handed me a packet of paper. I turned it over. It was his chemistry terminal exam from the end of the last term. Their chemistry master had just finished marking their exams and had passed them back to the students. In red pen, at the top right hand 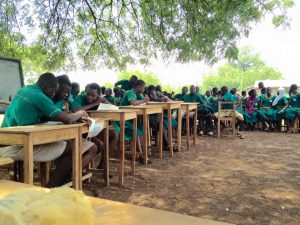 corner of the page a large 17% was circled. Saeed had failed his chemistry exam…miserably.

By now, some of the other students had brought their chairs to where we were sitting, listening intently to our conversation. “Madam,” Saeed began, “I cannot fail chemistry on my WASSCE exam. I will never be able to get into a good school after SHS if I do”. I noticed the other students nodding in agreement.

“How many of you passed your chemistry exam?” I asked. Not a single hand was raised. “Not even a D8?” I  clarified. Again, not a single hand was in the air. In Ghana, you can still pass a course with a D8 grade. The way the grading scale is set up, only a 39% or below is considered failing. When I first was exposed to this grading scale I thought it was ridiculous that a student who knew less than half of the material could still “pass” a class. With a grading system like this, surely it is rare for even a single student to fail, I remember thinking. But as I sat in the classroom with some of my best students, all of which had failed the chemistry exam, I knew I was wrong and I knew there was more than just a problem with the Ghana Educational System’s grading scale.

I spent the next hour just listening. I listened to my student’s frustrations with the education system and how they are taught simply to pass an exam, not truly understand the material. I listened to them telling me that when it comes to applying what they learned in the classroom to the outside world that they cannot do it. I listened to them expressing their confusion as to why they never (even once) enter the chemistry lab to perform experiments until their mock examinations just before they write the WASSCE exam their third, and final, year in SHS. I listened to their frustrations with some of their masters that only show up to their class three times in a given term and masters who show up but are ineffective in the classroom. I listened to the fact that they were tired of always being the ones to assume the blame when every single student in their class failed to pass a certain exam. I listened. I internalized their feelings and I became very sad.

Unfortunately in Ghana, this is an all too common reality. I know in the U.S. so many students are quick to blame others for their failures when in all actuality it is their own fault. In the U.S., I truly feel that most students earn the grades they receive. At Kumbungu SHS and schools all over Ghana, I feel the education system is setting these students up to fail, regardless of how hard they work.

And what can I say? There’s no Band-Aid big enough to cover their wounds, no words strong enough to mend their crushed spirits. What can I say or even do in the next 10 months that can change their harsh reality? I quickly realized there was nothing I could do or say except, “I hear you and I care”.

I hear your frustration when your master doesn’t honor their class period, so I promise to come to each class. 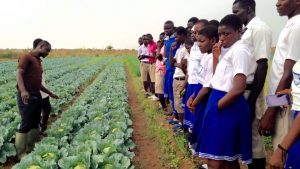 I hear your disappointment when your master does show up to their class period, but are completely unprepared for class so I vow to come to each class prepared and energized.

I hear the hurt when you work diligently inside and outside the classroom and still receive low marks, so I will not place the blame on you if you fail.

I hear you and I care. They say to only worry about the things you can control. I can’t control the administration at my school. I can’t control the teachers at my school. And I sure as heck can’t control the Ghana Education  System. But I can control myself and my actions. I can only hope that the way I handle myself as a teacher will rub off on others. Teachers here in Ghana seriously underestimate the value of the work that they do. There is a certain power that a teacher has in shaping young minds and I pray that my colleagues will take pride in the work that they do and give their profession the time and energy that it deserves…that the kids deserve.