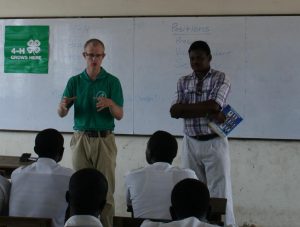 Back in May, I held a leadership training for my 4-H club officers. It went well for the most part, but I was struck by how shy the officers were—especially the president. The last club president, Ruhiya, was an intense third-year student who had no trouble stirring up her classmates for meetings and the like. Our current president, Rahamatu, was incredibly timid; at one point, she asked the vice president to ask me a question for her, even though we were in an informal small group setting.

As time went on, she became a bit bolder, but still seemed to be stuck in her shell. Soon, the Northern Region would be hosting its first LEAD (Leadership, Education, Agriculture, and Development) public speaking contest. I held a meeting to inform the students and ask which events they wanted to participate in. Surprisingly, she threw her name into the mix for the Agriculture Creed, which involved reciting a speech from memory and answering questions afterward.

School went on break, and I was dismayed to find that the break had been extended due to a lack of government funds. I feared that my club’s participation in the LEAD competition would have to be scrapped. I returned to Buipe with only one week remaining before the competition, hoping that my students would show up and be ready to prepare. Lateef, the vice president who was also participating in Agriculture Creed, was present. A couple of students who signed up for debate and parliamentary procedure were present, but not the whole team. I had accepted that I would have to be content with only sending one student. 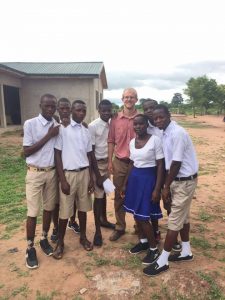 On Friday, the day before the competition, I received a phone call from Rahamatu. “Master, I’m on the way coming. I’ll be in Buipe by twelve o’clock.” I was skeptical at best. I asked myself how much she had practiced over the break and if I would be able to prepare her in one afternoon. At 4:00 PM, she strolled onto campus with a small suitcase and a big smile. I wearily asked if she was ready to start practicing, and she nodded.

We went into a classroom and I listened to her recite the creed at least three or four times, tweaking her delivery; the pace, volume, and body language. She had the speech memorized well but struggled with the questions. Such is life in Ghanaian education, where memorization isn’t a challenge, but critical thinking is. We methodically worked through the twenty-some odd questions she might be asked, and I must have asked “What do you think?” a hundred times. Soon, it got dark and we moved to the staff room since the lights worked there. Lateef joined us and worked on his answers to the questions, too. Eventually, I grew tired and went to bed, urging them to get their rest too.

We left Buipe around 6:00 AM the next morning. We hopped in a tro-tro to Tamale and were on our way. Lateef and Rahamatu continued to work on their answers to the questions, but the conversation was difficult with the wind whipping through the back seat. We eventually arrived in Tamale and made our way to the competition. After some opening remarks, the competition began and the Agriculture Creed was the first event. As a volunteer helping with the competition, I was assigned to wait outside the conference hall with contestants before they performed. It gave me the opportunity to interact with the students and help calm them down, and I especially enjoyed being able to hang out with Rahamatu and Lateef.

The first couple of contestants nervously entered, and the students outside were quiet. Slowly, their nerves calmed down and they began relaxing, especially Rahamatu. She relaxed and joked around with other students, and when other contestants came out of the conference hall saying it wasn’t so bad, she walked up to me with a tough face and said, “Master, I want to go next.” I was floored. Here was this girl who was too shy to ask me questions directly just a month ago, and she was volunteering to perform next. 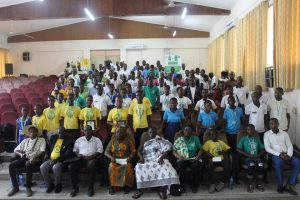 I didn’t get to see her performance, but my AgriCorps colleagues said she did well. They said the same for Lateef, but there were several good speakers that day and neither of my students placed. That wasn’t important to me, and I could see that it wasn’t important to them, either. They were proud to have represented their school, and I was proud of them for stepping up with little prep time and doing something uncomfortable, especially Rahamatu. It’s unfortunate that I won’t get to see her continue her growth as a speaker and a 4-H club president, but what I saw in her at the LEAD competition gives me hope for the future, both hers and the club’s.