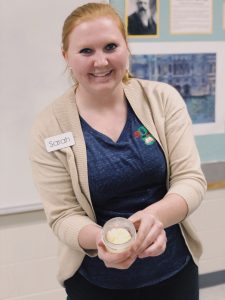 What are you up to now? Tell us about your day-to-day duties.

I now work for Cerro Gordo County Farm Bureau in northern Iowa where I serve as the Office Administrator. In addition to my daily administrative duties, I also spend a portion of my time working with North Central Iowa Ag in the Classroom. The organization covers an 8 county territory and has an “Ag Week” with a different elementary school each week throughout the school year. An “Ag Week” consists of a 40 minute, hands on agricultural lesson on a different topic for each grade. Currently, we have developed curriculum for students from Pre-K to 6th grade.

In addition, I also farm about 20 acres of fruits and vegetables with my boyfriend, Erik. His family’s farm is well known throughout the area, especially for their famous strawberries and the pumpkin patch we have in the fall. Each year, we welcome hundreds of families to the farm helping others establish a stronger link as to where their food comes from. I find this job to be very rewarding and fulfilling.

How did your time as an AgriCorps Fellow lead you to the career you have?

I think AgriCorps had everything to do with where I am in my career now. Prior to AgriCorps, I had very little teaching experience and wasn’t even sure if I enjoyed it all that much. However, after AgriCorps helped me develop my teaching “toolbox”, I set out and served as an agriculture teacher for a year and a half in northern Ghana. It was there that I discovered a love for teaching. That is why the job I have now appeals to me so much. I get to spend time in the classroom teaching about something I am SO passionate about: agriculture.

I also have AgriCorps to thank for my interest in growing fruits and vegetables. Growing up on the family farm in northern Iowa, I knew a great deal about growing corn and soybeans but not about growing much of anything else. In northern Ghana, I was exposed to all sorts of crops including yams, tomatoes, peppers, eggplant, okra, corn, soybeans and more. When I returned to the U.S. and met Erik, I was thrilled to continue to learn about fruit and vegetable production and we are continuing to scale up the farm each year.

How did your time as an AgriCorps Fellow shape your views on international development and trade?

More than anything, spending a year and half living abroad in a developing country made me so much more aware of the things going on in countries outside of the Untied States. Prior to living abroad, I lived my life much more under a rock. Sure, I read the news from time to time, but I didn’t always take the time to think about how the actions of the United States impacted other countries, be that directly or indirectly.

While living in Ghana, I had the opportunity to observe a Ghanaian presidential election, which occurred about a month after the United States. It was interesting just how closely Ghanaians followed the U.S. elections. When I inquired as to why this was, I was informed that if the conservative candidate in the U.S. won the election, the conservative candidate in Ghana would also win, and vise versa. This was statistically true since Ghana had begun operating under a democracy in 1992. I was amazed by this influence and the fact that as a U.S. citizen I had such a little idea of what was going on in the world around me.

Since returning to the U.S., I have been much more in tune with world news, especially as it relates to trade. I have found myself paying attention not only to U.S. trade relations, but other country’s trade relations as well. In my career, I have the opportunity to regularly discuss trade relations and ag development with young students and am thankful for the unique perspective that I can provide to them in order to challenge them to think beyond our boarders.