The thick African bush began closing in around our legs and as we hacked through the prickly vines that grabbed at us from the earth below and we began to shove past the huge tree branches, I began to loose sight of my Ghanaian guide. It was nine-thirty when we first stepped into the bush— each armed with a cutlass, a burlap sack, and a flashlight. It had rained earlier that day and the night was cool and crisp enough to see our breath as we walked along the trail to search for my new favorite delicacy: the snail. As we walked along I joked with Kueku Eric, my friend for the last month and a half. 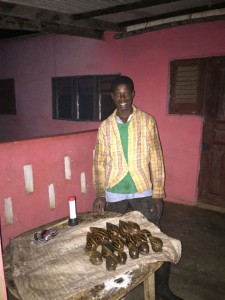 Kueku is the eighteen-year-old son of my caretaker and has a typical Ghanaian build. Strong from years of weeding the thick undergrowth on his family’s farm, he is a few inches shorter than I am, about five foot eight, and usually has a big smile on his face as he jokes around at the guest house and beats us all at Uno. But tonight he is all business. He teaches me where to look for the giant, fist-sized Ghanaian snails that only come out after a big rain to search for food. Ghanaian snails come in two types: the black ones called the savannah type are sweeter and the red ones, the forest type have red stripes and can grow up to the size of a child’s head! Eric uses his cutlass to search under the brush and around some fallen trees and then suddenly we both spot a large savannah right on the trail to his house. As the night goes on we head deeper into the bush in search of the “big ones”. The bush soon becomes so thick that I can no longer see my friend and his light but must listen for the sound of him hacking his way through the thick foliage. I stop for a second to listen and suddenly I feel a small pain in my right leg. I look down and am horrified to see the forest floor alive with a carpet of little black ants. I quickly push ahead and Eric helps me to squish as many of the little guys as possible. The last one I squished was nibbling on my ear lobe. 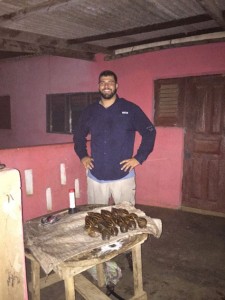 whole experience with enthusiasm and a sense of adventure I tell Eric to push on. We are never really to far from the community as I now realize it is only about 100 yards to Eric’s family home. We hit a trail soon and decide to check out a few more downed palm trees before I head home to call it a night. Suddenly Eric turns, his face stricken with fear. I have never seen a Ghanaian scared of anything including shimmying up a fifty foot palm tree in search of coconuts, sticking their arm up to their shoulder down a rat’s hole, and even bicycling in a large city here—which is deadly for sure. I am accepting that we are about to die as he jumps behind me and in a trembling voice says snail, snail, and I know that I am the only thing keeping him from running all the way back to his house and hiding under the covers. I think for a minute and am very confused. I only know one thing that Ghanaians are afraid of and it starts with s… Snake. Finally I get up the courage to ask how close it was and he points to a tree about thirty yards away. After letting my eyes adjust to the dim light for a bit I can make out the white underbelly of a five-foot long, bowling ball thick African python. It has just feasted on an animal in the tree and is lazily wondering why we are flashing lights at her and interrupting her after dinner nap. I explained to Eric that this snake was not dangerous unless he tried to pet it but it seemed to do little good as he only came around my shoulder to wave his cutlass and say “if I wasn’t so afeard id kill it!”. I chuckled and we watched the beautiful beast slither away into the night before heading home to count our catch. As I lay in bed later that night, exhausted and very happy to have been a part of this cultural experience, I know that it is just one of many to come in my time here in Ghana.

Cody Jones is an Agribusiness graduate from the University of Missouri. Before becoming an AgriCorps Member, Cody raised cattle and row crops and served as a state FFA officer.