On a “cold” 65°F morning of the harmattan season in northern Ghana, the windows and doors are closed to the classroom of the shivering agriculture students. Still, as I pass by the class, I am spotted through the window cracks and the students shout, “Mr. Matthew, teach us!” Upon entering the class, I find half of the students studying , a quarter sleeping, and the rest urging me to engage them since they have an open hour because they are reviewing for exams the following week and their scheduled teacher is absent. Now that it’s the end of the first term and they’ve had me for several lessons, they know I am not going to bore them with a lecture.

The first two weeks of classes in September started very slowly and really didn’t even exist at Pong-Tamale Senior High School. By October, and week three of classes, the students finally started to fill the classrooms and the teachers picked up where they left off on the syllabus the previous term. Still without a teaching schedule of my own, I spent the third week wandering into and out of the classrooms of Agriculture, Science, and General Arts students to introduce myself and 4-H, and also to get comfortable communicating and interacting with the students.

Since brain teasers are a good way to encourage communication and interaction, I thought engaging the students with my all time favorite would be appropriate. On the chalk board in front of class I wrote the problem: Three cannibals and three anthropologists have to cross a river. The boat they have is only big enough for two people. The cannibals will do as requested, even if they are on the other side of the river, with one exception. If at any point in time there are more cannibals on one side of the river than anthropologists, the cannibals will eat them. What plan can 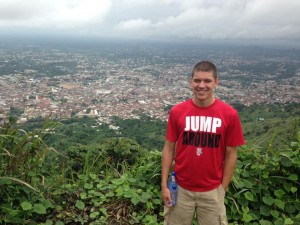 the anthropologists use for crossing the river so they don’t get eaten?

After writing the problem on the board, I explained to the the students who an anthropologist is and changed the term cannibal to carnivore to clear up the students’ confusion with the unfamiliar term. To help the students organize themselves to solve the problem, I had them split into groups of six and diagram the problem on paper. The concept of forming and working in groups seemed to be the greatest challenge. A huddle or group circle naturally seems like a good setup for group discussion. However, forming a huddle to communicate is not as common in football (soccer) as it is in American football, and may be a reason it’s as foreign of an idea to the students as American football.

After working for 5 minutes on the problem with pen and paper, I hinted at the number of people in each group not being coincidence, hoping that they would act it out. Critical thinking and interaction between students during class was clearly unnatural. I have since witnessed that most problems solved in class are done by the teacher on the board while students copy the steps and pretend to understand by replying, “yes, Master” to the teacher’s question, “is that not it?”.

After the groups struggled long enough, I asked for a group of six students to volunteer to come forward to

act out the situation. With 3 girls and 3 boys, we had our three anthropologists and three “carnivores”, respectively. A desk was our river, a notebook our boat, and the members of the class were anxious guides for the members manning the boat! The class was quick to correct the group if they left more guys than girls on a side. After making several mistakes, group finally made it safely across the river causing the class to go into a frenzy! I remember telling the class, “I’m glad you figured it out, because I forgot the solution.”

The students rarely hear a teacher say, “I don’t know” or “solve it yourself”, and when they are given a problem to solve, the teacher is usually quick to reveal the answer with letting the students struggle through it and learn from their mistakes. I think one reason the students want me to teach is because I allow the students to be active and interactive in answering their own questions and solving problems.

The problems the agriculture students now face, along with the cool, dry morning winds from the Sahara, no longer deal with anthropologists and carnivores, but rather with animal agriculture, like calculating a due date based on breeding date. However, they continue to work in groups to solve problems, and on this particular morning, compete on teams to answer questions quizbowl style to prepare for exams. Following the General Agriculture final exam, students said they answered a handful of questions correctly thanks to my review questions. But, I know it’s that they discussed in groups and even struggled to come up with the answers that made 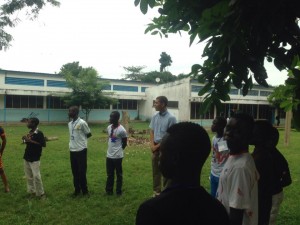 the details stick with them.

In January, AgriCorps members will be hosting a teacher training for agriculture teachers/4-H advisors and have lessons that cover several topics including two that I have helped prepare and will help present: problem based learning and lesson planning, preparation, and presentation. I hope the teachers leave the three day training with greater patience and enthusiasm for students taking over a class to solve the problem!