AgriCorps partners with existing Non-Governmental Organizations (NGOs) in developing countries that focus on youth development through agriculture. Through cooperating with the National 4-H Council, AgriCorps has been linked to dozens of 4-H programs around the world. Although AgriCorps provides capacity building opportunities for partnering organizations, we believe that a strong in-country partner is essential to furthering our mission, objectives, and outcomes. After two successful pilot projects in Liberia, our first corps was deployed to Ghana, West Africa, in partnership with 4-H Ghana. In 2016 we sent our first full group of Fellows back to Liberia, in partnership with 4-H Liberia.

4-H Ghana is a national organization dedicated to supporting rural youth in agriculture. It is based in Koforidua, Eastern Region, with most clubs located in the Eastern and Northern Regions. 4-H Ghana has a successful operation with almost 200 clubs serving over 5,000 members between the ages of 10 and 25. Programs include horticulture, animal science, entrepreneurship, record keeping, citizenship, and healthy lifestyles. The core program of 4-H Ghana is the School Entrepreneurship Farm, a program designed to teach technical and business skills to 4-H youth. Members may grow vegetables, cassava, maize, or other staples on the school farm. 4-H Ghana acts as a marketing cooperative for 4-H clubs to help them secure markets and add value to their produce. At the end of the year, the club will invest a portion of their profit back into next year’s school farm while dividing the remaining profit as dividends amongst 4-H members. Kwaku “Boat” Boateng, a district director in the National Youth Authority, is the executive director of 4-H Ghana. The program also collaborates with the Ghana Education Service and the Ministry of Forestry and Agriculture.

Since 2012, 4-H Ghana clubs have been recognized with 23 district and regional agriculture awards by the Ministry of Food and Agriculture during National Farmers’ Day celebrations.

The first 4-H club was established in Liberia in the early 1960s and the program continued to grow until the war in 1990. At its height, 4-H Liberia boasted a fellowship of 27,000 young people in 1,950 clubs. The Ministry of Agriculture directed the program. At the outbreak of the civil war in 1990, 4-H and the School Garden Initiative were abandoned. In 2005, a small group of volunteers and former 4-H Liberia Fellows reorganized the program as a non-governmental organization. In 2012, 4-H Liberia entered into a partnership with the World Food Program, which allowed the organization to grow in staff and capacity. 4-H entered ten counties and founded ten clubs per country through the grant. Since 2012, 4-H Liberia has increased their club membership and once again partnered with the Ministry of Agriculture and Ministry of Education. Umaru Sheriff is the Executive Director for 4-H Liberia.

4-H Liberia is part of the Global 4-H and Africa 4-H Networks. Follow their activities on Facebook. 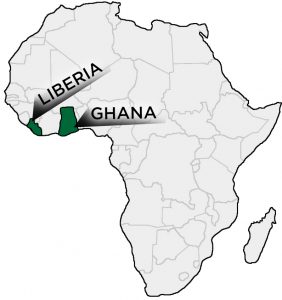 4-H Ghana Pledge:
I promise to work towards becoming a youth with a clear head, an open heart, clever hands, and a good health so help me god.

The Republic of Ghana became the first country in colonial Africa to gain its independence in 1957. Today, the former Gold Coast Colony of Great Britain has a population of 27 million people, with an estimated annual population growth of 2 percent. Ghana is rich with cultural, religious, and linguistic diversity, though the official language of Ghana is English. The southern half of the country is largely Christian and the northern half is primarily Muslim. Throughout the country there are many people who maintain strong indigenous practices. Ghanaians have a well-deserved reputation for being a welcoming and open culture.The Republic of Ghana has a presidential form of government. The political climate has remained positive and stable since the birth of the fourth republic in 1993. There have been three peaceful transitions of power since then. The current president of Ghana is John Dramani Mahama. As former Vice-President, he took office upon the death of his predecessor, John Atta Mills, on July 24, 2012. He was elected to serve his first term in December 2012. Ghana is one of only five countries in Africa with a free press and there is open debate of political issues on television and over 100 radio stations and newspapers.Small-scale producers, with an overwhelming majority of farms less than four acres, dominate Ghana’s agriculture sector. Staple products include maize, cassava, yam, plantain and cocoa. Livestock comprises mostly of poultry, cattle, and goats.

Liberia was started by a group of freed slaves from the U.S. in 1822 and became a republic in 1847. Today the country has a population of about 4 million people. The official language is English however there are around 20 ethnic languages that are also spoken but rarely used in correspondence or written. The country’s population is largely Christian but around 15 percent of the population is Muslim. The political history of Liberia is complex and interesting with stretches of improved economic conditions followed by a decade of autocratic rule, military coups and a prolonged civil war. In 2005 President Ellen Johnson Sirleaf was elected through a democratic process and has remained in power through reelection. Liberia was plagued by the Ebola crisis in 2014-2015 and is now recovering. Agriculture employs nearly 70 percent of Liberia’s population. The major crops produced are rubber, cocoa, rice, cassava and sugarcane. The livestock industry is mainly sheep and goats.

Does AgriCorps plan to expand into more countries?

Yes. In the Fall of 2016 we expanded into Liberia in addition to Ghana. We are currently exploring opportunities with several programs in Africa and Latin America in the coming years.