The Fellows and I were sitting at our dining table and the new year had just begun. We were all brainstorming trying to create visions for what we wanted to do in the last 6 months in our communities. Then I spoke up and said, “I want to have a LEAD (Leadership, Education, Agriculture, and Development) workshop in Akwadum.” Our country director, with his highly motivating and passionate personality encourages me and says “Yes! You should do it! And get it funded through your home organization and have it in 2 months!” A brief pause and slight feelings of anxiety ran up my spine. “Boom! Its happening, I’m telling the stateside staff that its official,” he continued. And like that, I was set to have a L.E.A.D. workshop in Akwadum, challenge accepted.

A few months back, we had just accomplished our first LEAD workshop hosted by AgriCorps Fellow Carrie and because of the success of the event, there was a high standard set as to what a LEAD workshop should look like. I knew that I wanted my workshop to also be a success, but I realized how important it is that my workshop be unique to the strengths of my host community. Prior to the planning process of my workshop, I was roaming like a goat around my community and it has allowed me to make valuable connections. I have been able to meet the best farmer in my district, the best extension agent in the district, and made connections at a local Cocoa Seedling Production Unit right outside of my community. Utilizing these resources and combining them with those from 4-H Ghana, I knew that I could have a great event.

After inviting these newly formed connections to the upcoming event, the real work was set to begin. Now the challenge was getting my 4-H members to successfully conduct opening ceremonies and perform the Agricultural Creed. During one of our regular Tuesday meetings, I announced to my 4-H Club, Akwadum Excellence, that we would be having a LEAD workshop at our school and that the event would also act as an excursion for the club. 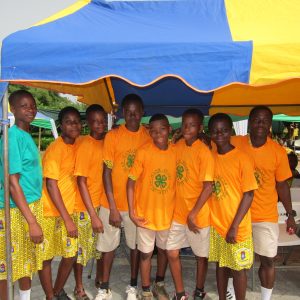 As soon as I said “excursion”, a rare word mentioned at my school, my club members’ faces lit up with excitement and joy that grew into a thunderous storm of cheers and applause. After their time of enthusiasm, I announced how now that we are all excited, the real work is to begin! I issued a challenge of who would be brave enough to learn the agricultural creed and present by memory at our workshop. One student was brave and bold enough to accept the challenge, Bernard from Primary 5. That very afternoon, I was greeted by an eager Bernard ready to learn his part and contribute to the LEAD workshop program. Initially, working with Bernard to learn the creed took quite a bit of effort but through his persistence and enthusiasm, Bernard was successful in learning the speech. The 4-H club officers showed the same persistence in learning the opening ceremonies for club meetings.

All the arrangements were made and before we knew it, the day of the workshop was here. Over 80 students had signed up and paid their registration fee so we knew the day would be hectic, but with the help of the other fellows, everything went smoothly. The event was filled with multiple activities and learning opportunities for students: great conversation between 4-H members, 4-H staff, farmers, and officers from the Ministry of Food and Agriculture; a tour of the Cocoa Seedling Production Unit and processing facility; and leadership/entrepreneurship development activities designed to increase student’s knowledge of what it takes to be a successful entrepreneur. 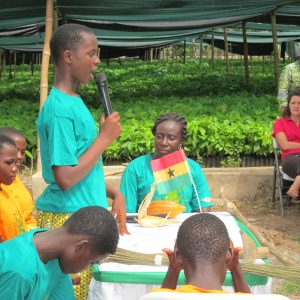 But the best part of the day was when my officer team recited the opening ceremonies from memory almost without flaw and Bernard stood in front of his classmates, and delivered the Agriculture Creed. Seeing all their hard work pay off was so rewarding. Bernard and my officer team committed their time, efforts, and hearts to learning and preparing themselves to perform these 4-H traditions. The LEAD workshop was a great success for not only me, but my students who proved to themselves and everyone who attended that they are the leaders of tomorrow. The 4-H LEAD Workshop is an excellent showcase and learning avenue for my students and I’m so excited to see them take these skills and finish the year strong!