There was nothing but silent anticipation as I approached Korm. It had been 10 months since I left the place that became to be second my home, my family, and tribe. I sat in the front seat of the taxi unsure what to expect; would the 4-H club still be thriving, would the community still be implementing the new practices, would I remember the local language, would my neighbors remember me – heck would I remember all of them. The night before, I lost sleep as these questions ran through my head and I created imaginary scenes of what it might be like. In my head, I wanted everything to be as if had been 10 months ago, but as the car turned approached the outskirts of Korm, I knew instantly that this would not be the case. 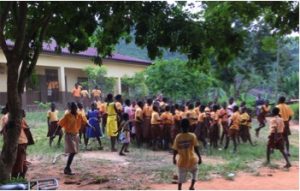 faces. As the taxi pulled into the school I heard multiple voices in the distance saying, “Madam Kelsey!” It was the middle of the school day, but like an uncontrollable wave, the students all ran from their classrooms to greet me with a group hug. Running towards me was my host mother, Elizabeth, waving her hands in the air, as she always would, and wearing her bright smile that even on my toughest days in Ghana, would always put me in a good mood. She greeted me with a giant hug and a face full of tears. This was the Korm I knew and loved.

As the day progressed, I quickly fell into the familiarity and routine of my old home. My mother traveled with me to Ghana and we toured the community to visit old friends and make introductions. As we moved from place to place, I noticed many changes in the community. The first major change I noticed was the electric lines that now run from house to house! The school now has 20 teachers compared to the 13 from last year. I was introduced to new spouses that moved into the community and encountered some new babies that were born over the last 10 months. Naturally I noticed the major changes first, but after the hype of being back I noticed the little things: the 100-year-old mango tree got cut down, my favorite bamboo chair was gone, even the door of my old house was replaced. As I looked around and saw these minor changes, I felt desolate. Korm had change. 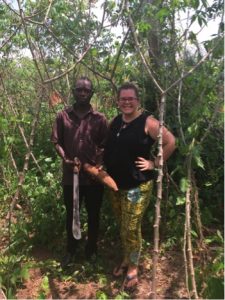 saw, I wondered “what impact had I made?” The last day I was in Korm, I finally recognized the positive transformations. The 4-H club has seven acres of land, the ‘One Child, One Plantain’ project was still active and they even had started selling liquid soap. Along with selling soap, the science teacher was using the experiential learning method when making the soap with the students (hallelujah!). The farmers I worked with on no-till farmer were still using these practices AND they even planted cover crops during the dry season (hallelujah again!). When I served as an AgriCorps Fellow, I was placed in Korm to implement change. Even when I left Korm in June 2016 and it was not the same as when I arrived in August 2015. Change can be scary, but progress is impossible without change! I realized on the last day that the community had grown since I left and that wasn’t something to lament, but something to celebrate.

Kelsey Knight is a Community and Leadership Development graduate from the University of Kentucky. She served as an AgriCorps Fellow during the 2015-2016 class in Korm, Eastern Region, Ghana. Kelsey now serves at the AgriCorps recruiter.