The hot sun blared down with a merciless pulse of unwavering heat. Sixty-seven learners sat in their cramped rows that had morphed into a disorganized blob of desks. There were no lights above and a glare from the barred window shown on the chalkboard. The glare made it so that 75% of my 67 learners couldn’t read the board. My proper English was still difficult for them to understand, so I knew we were in for it.

In a moment where difficulty of communication met my expectations for the upcoming lesson, I experienced a flashback to my Sophomore year of high school. I was National Secretary for the International Boer Goat Association (IBGA), so I had the opportunity to attend National FFA Convention and work a booth at the Career Fair. I was a wide eyed newly turned 16 year old, that had just got her license and had the world was at her fingertips. I remember standing on the cushioned blue carpet with surrounded by National Blue and Corn Gold absolutely mesmerized by the technology, innovations, companies, and potential opportunities all around me. When I looked up there were huge blue and white banners hung from the Indiana Convention Center about 9.1 Billion by 2050, the average age of the farmer, and doubling food production. I could feel it. This was going to be the defining moment of my career. All the sessions in the week that followed mentioned the 9.1 Billion while giving us a sense of urgency, inspiration, and empowerment. I was driven and wanted to do ANYTHING I could to help, but there was no direction or plan that met this save-the-world, hail-Mary feeling that was driving my new-found passion for feeding the world.

Seven years later, this same feeling, the same passion, has not left me.

In the years since, I have earned a Bachelor’s of Science in Agricultural Economics. I have learned more details about how development, education, yield, and arable land play that fit into this complicated equation. The equation that wrecked my world for compliancy and dreams of a job that has 401K plans, pays the bills, and a nice vacation once a year.

The need for food brought me back to my current reality Liberia, West Africa.

Reigning in my ingenuity, I wrote the warmup question on the small dry erase board and carried it around the room. 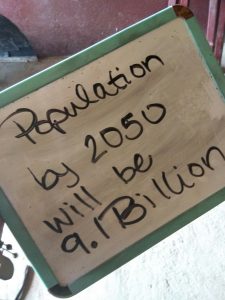 True/False: There is enough food grown on Earth to feed the world.

I was not surprised. Liberia is the 4th poorest country in the world.

First, we discussed the factors that go into feeding the world:

Then we learned about population growth. We talked about how the population for the whole Earth was 1 Billion in the year 1830.

Today in 2017, the world’s population is climbing at 7.5 billion people and still counting.

“Ms. Harpa, does this have anything to do with plant science?” Ruth said with a complaint tone in her voice.

Then I got quiet, and waited for our previous memorizing chant to follow. For the first time, I broke the news to them that the population would be 9.1 Billion by 2050.

We discussed how important it was for us as agriculturalists to grow 70% more food by 2050 then we already are.

How does plant science relate to food security? This was their answer. We discussed the efforts of major manufacturing countries like U.S., India, China, and Australia are almost maxed out on yield and land and thus, how much food they can produce. In a discussion that could easily be hopeless, I knew there was hope. That’s why I was here, wasn’t it?

Africa is the only continent left on our Earth that can still increase agricultural productivity by a significant amount. In fact, Africa has 60% of the arable land left on Earth and if we are really considering the 2050 estimates, we are seeing that the poor are getting poorer and the rich will be getting richer. There was a clear shift in students’ posture and the atmosphere of the room at this point.

That’s when the lightbulb turned on. That eureka moment every student has when you’ve FINALLY reach them struck. In my classroom, no less. Slowly, but surely my students began to see the value in Africa, and the value in Liberia. For Liberia to succeed, Liberia has to feed Liberia, Africa has to feed Africa. That it will take us. This class. My class to feed the 9.1 Billion.

I asked them how that made them feel. Nyan was the first to respond, “Inspired.” The quiet student that usually seems disengaged said “Empowered. “

I often think back to the moment on the blue carpet that changed the direction of my career path.

Sometimes the students ask me, “Ms. Harpa, why you here?”

But there is that one, like this one. And I’m ever so thankful for the power of one.

Megan Harper is an Agricultural Economics graduate from the University of Kentucky. Before becoming an AgriCorps Fellow Megan was a Kentucky State FFA Officer.