The warm tea was a nice touch to the end of a busy day of travel. One hundred miles in seven hours – yep, I’m in Ghana for sure. I paused and silently stared at the white tea cup in front of me. My eyes followed a hairline crack from the base of the reservoir, zigzagging its way up to the rim where it spilled out into a jagged, triangular chip that was evidence of some former accident. I was jarred from my concentration by the ongoing sound of crumpling paper. The crumpling gave way to the sound of paper being dragged along the ground. Unable to contain my curiosity, I whirled around to see sparks from a fiery torch littering the ground in a fan-like pattern. My host brother holding the torch, loudly stamped his feet on the bare dirt. Millions of tiny warriors had suddenly descended onto our home from deep in the forest, and if we didn’t expel them from the palace, every inch of our living space would be overrun in a matter of hours. 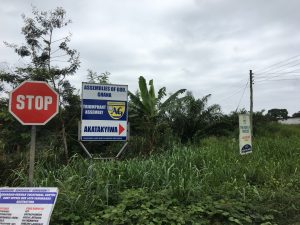 feels more like home with each passing day. Work in the community begins at the first hint of daylight – sometime around 5:15 and 5:30 – so there’s no hope of taking a morning jog without hearing “Obronie! Obronie!” as I pass through the center of town. I’m told that I can’t run down the path that leads into the forest. So, for now I make the short trek down the dusty, pothole-ridden road that brings me to the main highway. It’s here at the junction where a right turn will take me to the capital city of Accra and a left turn will lead me to the former capital city of Cape Coast. As I turn back down the winding road to Akatakyiwa I pass the Akatakyiwa Catholic Basic School. This is the place where I’ve cut my teeth on teaching. If I squint, through the dim, foggy morning light I can make out the tiny school garden at the back corner of school property. My mind wonders to my grandiose vision for expansion, endless improvements, drastic yield increases, students passionate about agriculture, and the incredible amount of time and energy it’ll take for me to establish all of that – my brow furrows as the gravity of the task at hand sinks in. How can I accomplish all that on my own? What did I get myself into? I didn’t sign up for this! Actually yes, I did sign up for this, and I cannot, in fact, accomplish any sort of community development on my own. Yet my dim mood begs the question: Why did I come here in the first place?

As I prepared to leave for Ghana, a lot of people asked me what I was going to do in Africa. Many people even asked me how was going to go about accomplishing what I’d set out to do through AgriCorps. But very few people asked me “Why?” What would possess a recently graduated agriculture economics student from America, born in a barn and raised on corn, Bibles, and Midwestern hospitality want to go to West Africa? 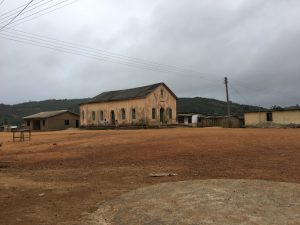 Two weeks ago, I found myself listening in on my host father and a university professor berating my newfound friend for his lack of effort in the community project he had initiated. I’m a clueless expatriate that had just unwittingly led this unfortunate Ghanaian student into the lion’s den. I was torn between feeling angry at myself for and feeling sorry for my friend when I was suddenly struck by this phrase coming from my host father: “Prince your project is not about the snails, it is about the people!” Allow me to introduce you to Prince Mensah. He’s the one I led into the lion’s den where he was positively admonished and then redressed by the chief of my village – my host father – along with the program coordinator for Prince’s community development work in Akatakyiwa.

You see, Prince was completing his capstone at the University of Cape Coast through establishing a snail farming cooperation made up of community members. He had experienced a serious setback recently. A member of the snail growers’ association he established in Akatakyiwa fed the snails salted cassava, halving the snail population in an instant. In a panic at the prospect of his capstone project suddenly experiencing utter failure, Prince quickly shut it down until he had time to properly address the issue. This situation he had thought was known only to him and a few farmers had failed to escape the notice of the chief’s watchful eyes, which leads us up to the current conversation. “The only way you can fail is if you don’t use this experience to empower the community members to improve their livelihoods. It is NOT about those snails.” I sat there in disbelief, because in the short time that I’d been in “the trenches” of agricultural development, I had nearly lost sight of the one true objective for which I came to Ghana: to impact the people.

So why have I come here? At face-value, the answer seems idealistic and broad: I want to empower people to improve their 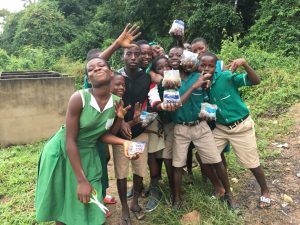 livelihoods, in order that they might envision a brighter future for themselves, their families, their communities, their country of Ghana, and ultimately our world. To put it more plainly, I came to live with, learn from, and work alongside the members of my community, Akatakyiwa. I want to inspire youth to pursue careers in agriculture, I want to empower young people to be leaders in innovation, and I want to see famers adopting improved methods for livestock and crop production. The reality is that in less than nine months I will be leaving the community of Akatakyiwa, and my effectiveness must only be measured by the longevity of the progress that I’ve helped to initiate. It’s for that reason I must focus on the people, rather than the projects themselves. My name will eventually be forgotten, but my legacy will live on in the people into whom I have invested. As a friend once told me, don’t just teach a man how to fish, teach him also how to manage the pond.

Though progress here in Ghana – and everywhere for that matter – rarely comes easy, it’s the small successes along the way that make the journey exciting. Just like it took some hard work (building fire, finding the ants), quick wins (quickly eliminating all the live ants inside the compound), critical thinking (using their fear of fire to expel the ants), and a little bit of time (3 hours) to successfully expel the army ants from the palace, it will take work, small victories, some brains, and time to really see development take place in my community. But it’s often the most difficult endeavors that are ultimately the most worthwhile. This journey in Ghana, I am sure, is no exception.