It is a typical Wednesday in the Upper Manya Krobo district. I do not teach today; instead, I dedicate my time to MOFA (Ministry of Food and Agriculture – USDA equivalent) and the extension portion of my job: visiting local 4-H Clubs, visiting farms and consulting extension agents on various facets of tropical agriculture. I always visit with one man in particular, Mr. Edward Sawodji. He is a well-educated MOFA extension agent, who also dedicates much of his time to 4-H. He believes development of his country lies within the youth. When he isn’t assisting farmers he’s visiting various local schools ensuring and encouraging 4-H Clubs. I try to keep up with him, but it’s a struggle since the man is always on the move. He is driven to build a better community with strong leaders.

Mr. Sawodji was born in the town of Akim Oda in the Eastern Region on May 18th 1968 and is the eldest of four children. 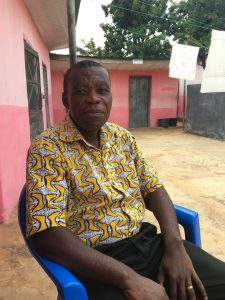 Both his parents were teachers while his father also practiced farming. At a young age he began to assist his father in some of the activities on the farm. When entering secondary school, Mr. Sawodji truly fell in love with agriculture as he developed an understanding that anything we do depends on agriculture. He chose to pursue agriculture within the school curriculum, receiving encouragement from his mother do so. After finishing form 1 – the equivalent of 7th grade – he received an offer he could not refuse: a scholarship from the Ghanaian Government to study a masters program in agronomy at the Higher Institute of Agriculture and Animal Science of Havana, Cuba. His father encouraged him to pursue this opportunity, and at the age of 15, he decided it was an experience he could not pass up. This masters program was a chance to practice a new way of doing things. It was a five-year program where he would also finish his secondary school. His thesis was comparing maize cropping systems and small-scale farming. He was tasked with evaluating the difference in yield of intercropping velvet beans with maize, maize with fertilizer applications versus maize alone and assessing the impact on farmers. In the end, the maize with fertilizer applications produced the highest yield, while intercropping benefited the farmers and soil health most.

He came back in 1994 at the end of his scholarship and entered into his national service with MOFA. At the end of his national service he joined the National Disaster Management Organization from ’98 to ’09. In 2009 Mr. Sawodji was finally reunited with his first true love: agriculture. He has been an agriculture extension officer in the Upper Manya Krobo district for the duration of his time with MOFA, and in 2012 he was chosen as the extension agent within the district to work with 4-H Ghana. He went to Koforidua for training and soon established the first ten 4H clubs in his district. He trained an advisor for each club and gave them maize seed along with various vegetable seed to begin their programs. During this time, Mr. Sawodji developed the interest of working with youth. He said he, “realized they are the point of transferring technology to the community.” One success story he shared with me was of the Akorkorsisi JHS 4-H club, the students developed grass cutter rearing without any assistance. Another student from the same club started an alternative garden on his own where he grows cabbage and has prospered quite well. Every time the two meet, the former student embraces Mr. Sawodji and thanks him for everything, especially for introducing him to 4-H. During a trip to Tanzania on behalf of 4-H, he explained how it opened his eyes to the possibilities that 4-H has around the world and in Ghana. He heard of a success story from Kenya where a school for students who have lost their parents to AIDS started a 4-H Club and through their efforts are now feeding the school three times a day and even built dorms with money raised from their club and garden. This has motivated him to pursue the creation of a 4-H Learning Center in Asesewa. The idea has developed and by this time next year he plans to have the center operating. His plan is to build a 4-H Learning Center for the whole district at the Amen International School in Asesewa, a school I have visited various times to advise their club. It’s here that students will have the opportunity to study and practice horticulture, goat rearing, chicken rearing, fish farming, and much more. In essence, he wants to develop young farmers and change the concept of agriculture; from the concept that agriculture is for the poor, to one where people see the true value behind the science and business of the agriculture industry. 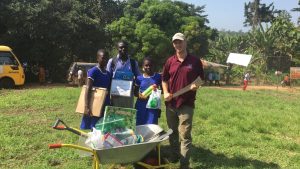 Mr. Sawodji has shown me that sometimes all we need is faith in both ourselves and in the youth. If he had not taken the chance when he was 15 to go to Cuba, he may have never had the opportunities that he has had to influence the youth of Ghana and people like me. We need more Mr. Sawodjis, with his mind-set and dedication to improve his community through the youth and agriculture. Some days in Ghana can be discouraging; I feel as if there is more I can do or that there is nothing else I can do – but then I think of Mr. Sawodji, a man unwavering with an unmatched spirit to help others. Through 4-H, I believe we will develop soon-to-be generations of Mr. Sawodjis, and that’s why I believe in the future of 4-H and the future of Ghana.

Ryan Tomlin received a degree in Plant & Soil Science from Texas A&M University. Before becoming an AgriCorps Fellow Ryan worked as an agronomist for Robinson Fresh in the southwestern U.S. and Mexico.