I sat in bed staring at the chipped blue paint on the walls. The afternoon sun streamed into the room in long rectangles, squeezing between the frosted glass slats of the window. Speckles of dust lazily drifting in the air were illuminated as the light reached in and further faded the remaining pigment on the wall. A bead of sweat rolled down the center of my back while the screeches of children (and goats) mixed with the rhythmic beating of an ever-present bass in the distance. I leaned back feeling the broken plastic chair start to give under the weight and watched several ants scurry across the floor carrying crumbs in a perfect line. My face had settled into a scowl as I contemplated what to do next.

The messages rolled in, causing my phone to buzz almost continuously. Our group chat with the AgriCorps Fellows (ACFs) in Ghana was blowing up. I sat miserable and alone reading everyone’s accounts of their accomplishments in the last few weeks. While some were creating school gardens from scratch and building from the ground up, others were helping their school harvest from their already successful plots and were heading up discussions for expansion into animal production. Others had started evening classes for students and weekend classes for farmers. Officer elections had been held, trainings had been completed, and 4-H clubs were on the move.

Despite all the triumphs and successes of our team, I was weary and rather frustrated. It isn’t that I made failed attempts while they were out making power moves; it’s that I felt like I had done nothing at all. The other Fellows were rightfully celebrating their victories together. I was sitting alone, isolating myself with the overwhelming feeling that I was falling behind.

But in that moment, I had forgotten a few things. The first was that I have, in fact, done something. When I first arrived in Yamoransa, the town of 5,000 had overwhelmed me. No one could understand me through 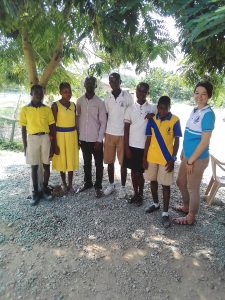 my thick American accent, the giant portions and carb-dominated diet were killing me, and I felt like an awkward outsider with my homestay family as I learned the nuances of a new group of people. School was hardly better. I sat and observed for several weeks before teaching my first unit on soil conservation and even then, I had lots of free time in the office, trying to figure out how groups of colleagues interacted in Ghana. My brain was constantly working to take in, decipher, and apply new information. Day to day interactions were exhausting and I often ended up going to bed at 7pm in the hopes that I could have time to myself to just decompress.

But since my arrival, each day has gotten better. I’ve been actively asking questions about the town, my family, and the school to get a better understanding of the community and their needs. I’ve communicated with my host mom, Comfort, about how much and what kinds of food I typically eat, slowly convincing her that I’m not going to starve if I don’t eat a pound of rice a day. The students in my school are used to my presence and feel comfortable with me in the classroom. But these things didn’t happen in one day. And this particular day, I had forgotten they had happened at all.

The second thing I had forgotten is that just because the other Fellows had experienced several positive developments in their communities and schools, it in no way meant that they also were not experiencing feelings of defeat. In an attempt to ease my burden, I reached out to a Fellow to voice my fears and frustrations only to discover that she had also felt the same way. And since that day, every single one of the Fellows has shared that sentiment at one point in time. 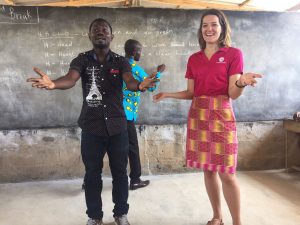 That particular day I was in need of encouragement. Not encouragement by a cheerleader telling me that I could do it and certainly not encouragement of hearing how successful everyone else had been. That day I needed someone to share in a frustrating experience with me and let me know that they had been in the trenches, too. She reminded me that everyone’s struggles are different and that you can’t compare someone’s accomplishments in a different school, living situation, and town. She simply needed to remind me that there isn’t a perfect roadmap to follow, there isn’t a checklist to complete, and there certainly isn’t a race to win.