I awoke to nothing. No clucking chickens or bleating goats. No creaking cars on the rough roads. No 5am voice yelling “PROMOTION, PROMOTION!” Finally, for the first time in such a long time, there was complete peace and quiet. A gentle breeze welcomed me as the glaze over my eyes became clear. I opened my door and took a short walk into the bush to the top of a hill I had noticed the day before. The tender whisper of the trees around me as I continued my journey to the top of, what we called, “Pride rock.” The sun was not yet over the horizon, yet I could see the cascade of yellows and oranges peak over the hillside. I had finally made it to the top. The sun now crawling up the skyline to greet me. Its warmth kissed me with a kind “hello,” and I replied with a smile in the tranquil state.

A few weeks ago marked the ¾ benchmark for my time here in Ghana. It’s crazy to look back and see how much I have personally grown and changed throughout these last 8 months away from friends, family, and loved ones. Lately I have been having a hard time staying motivated and encouraged through the tougher days in my community. Those times being when a project or effort failed to meet my preconceived goals or aspirations. In those times, I have learned to lean on my colleagues and loved ones to find the motivation to try again and continue pushing on. Though these efforts are appreciated, it still doesn’t make it easy to overcome these obstacles.

The second term of school had just ended, and we were officially on break. The other fellows and I journeyed to the 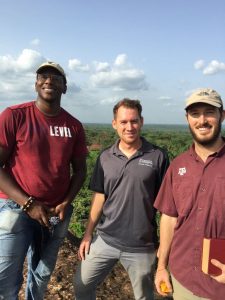 Brong-Ahafo region, which is a few hours north of Kumasi. We had just finished our tour of agricultural company looking into the production of moringa, a tree who’s leaves and seed oil have many beneficial properties. Now that our formal business was done, we were given some time off to rest and recharge. A few of the fellows and I stayed in Brong-Ahafo, while the others ventured back to Koforidua. Initially, I was reluctant to stay in the region, mainly because of how unfamiliar I was with the area. I was more interested in relaxing in my better-known setting of Koforidua. Though encouragement and a little peer-pressure pulled me out of this box. Eventually we found ourselves at a hidden gem of a monastery near the city of Tanoboase. Never, have I seen a place so peaceful and quiet that I felt it necessary to carry conversation only in the volume of a whisper. This was contradictory to times in my community where I practically must yell at times for my students to hear me. It was different and refreshingly pleasant. Every morning we were greeted to only the sounds of the few birds chirping and our own thoughts. The grounds of the monastery were everything I could have asked for in a relaxing retreat with its mangoes, star fruits, coconuts, oranges, and tea trees all over. There were several large rock hills that were perfect for climbing and enjoying a wondrous bird’s eye view. 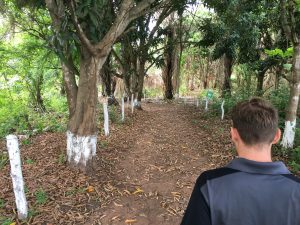 The peace and quiet there was so different from what I have come accustomed to in my community, where thin walls and thinner windows let all the sounds of the outside world enter my spaces. We spent 4 days here and it took time for me to get adjusted to quiet spaces. Through my time of reflections, I began to see my need for times alone and to just be quiet and be still. A time to refresh and re-calibrate. I would consider myself to be an extroverted person, but I see that it is ok to also embrace my introverted moments. Not as a character flaw, (which I once believed) but instead a time to calm my mind from the stress of daily life and re-focus. Times of peace and quiet are need for endurance to push forward and continue doing your best. I am thankful that I’ve been able to embrace that quiet time and recharge. Now I am rested and excited the third and last term of the school year and my last quarter of my time in Ghana. Let’s GO!!!