My heart started to race and I could feel the excitement building inside of me as Trent McKnight spoke about AgriCorps to our internship group in Greenfield, Indiana in August of 2016. I had heard about AgriCorps when I was a sophomore at NC State University, and it sat in the back of mind for those two years. From sophomore to senior year, AgriCorps just kept showing up. Was it a sign? Maybe.

As a junior, I became an intern for Elanco Animal Health Company working with the companion animal business unit in Dallas/Fort Worth, Texas. I knew I wanted to work full-time with Elanco once I graduated, but AgriCorps was still in the back of my mind. I started to become more serious about it in that summer, and became extremely conflicted. If I got a job offer from Elanco, I didn’t have to potentially give up a good salary with benefits straight out of college to become an AgriCorps Fellow for a year, where I would be on a volunteer salary. I also did not want to miss the opportunity to be an AgriCorps Fellow, because it was something I was increasingly passionate about the more I learned about the organization. Over the entire summer, it was a large source of concern for me, but sometimes when you wish for something, you actually get it.

I was sitting in the middle of the window-filled room, wearing a navy blue shirt and white pants. I was excited about Trent coming to speak about AgriCorps, and had already been looking at the application. I was also extremely nervous. Then he spoke the magic words, “we have decided to work with Elanco, so that any intern who gets hired for Elanco, but who also wants to be an AgriCorps Fellow, has the chance to go to West Africa and come back to a position within Elanco.” I literally (and I mean literally) jumped out of my chair. “This is too good to be true,” I thought to myself, as I’m sure Trent was thinking, “who’s this crazy girl freaking out over here?” Now my dream was becoming a reality, but it wasn’t over. In September, as I sat in a lab in the Animal Science building updating data spreadsheets and watching it rain outside, the Elanco recruiter, Tom Heady’s name appeared on my phone. He was calling to inform me of my job offer from Elanco to serve as a companion animal sales representative; it was finally becoming real. Now, I actually had to make the decision of whether I was going to just take the job and run with a steady salary straight out of college, or if I was going to take this chance to spend a year in Ghana or Liberia, working to increase capacity for agricultural education as a volunteer. We all know how that turned out. In December, I took the leap.

I applied for AgriCorps and found out in January that I was accepted. I then worked with Mr. Heady to extend my 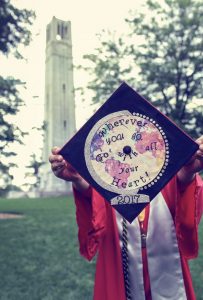 start date to August of 2018, so that I had some time upon returning from this years’ service to spend with my family. Now, 8 months later, I am currently awaiting my placement to see where I will be working! Elanco and AgriCorps have been extremely helpful throughout this entire process. It has been nice to know that I do have a job post-AgriCorps, as many of the fellows were unsure of their next steps, until very recently, and others are still unsure. Some people asked me why I didn’t just go work for Elanco right after graduation since I had student loans and other responsibilities. I know that my growth in this past year has improved my agricultural knowledge and my global competencies, exponentially to what I would have had before. No one prepares you for the year following university graduation like you think. It’s the one time in your entire life that you really get to figure out who you are and what you want with your life. This, in turn, can be extremely frustrating at times, and really liberating at others. Getting to know yourself in an environment with an ultimate B.S. filter is something that most people don’t get to do. Everything seems rawer in Ghana; you are forced to figure out who you are and to embrace it, wholeheartedly. Not only has being here helped me learn more about myself, personally, but also professionally. One of our jobs is to help connect local problems to local solutions, and being here has increased my problem solving skills and helped me rely on general knowledge and creativity to help others in solving their own problems. This year has been the prime time to complete a service such as AgriCorps, and I know that it will help me be a better employee for Elanco and for the rest of my professional career.

As I look back to almost two years ago, I wouldn’t change the decision that I made to be an AgriCorps Fellow prior to going to work for a corporate company. I know that my experience here has made me a more well-rounded individual, both personally and professionally, and the skills I have learned in Ghana are only going to be built upon in my role as a sales representative moving forward. Elanco and AgriCorps have worked together to create this collaboration so other young agriculturalists my age can have the same opportunity to increase their global knowledge and perspective at, in my opinion, the perfect time in their lives. I am more than grateful for this opportunity that I have had to work for two companies that I absolutely love, and I cannot wait to see how this year impacts me and other AgriCorps Fellows down the road.

To learn more about the AgriCorps-Elanco partnership, click here!