“I believe in the future of agriculture…” The words were so familiar, but rang out so differently that day. “With a faith born not of words, but of deeds…” The sound from the speakers was scratchy and slightly delayed. “Achievements won by the past and present generations of agriculturalists…” But I didn’t care. “In the promise of better days, through better ways…” The voices were smooth, well-practiced and paced. “Even as the better things we now enjoy have come to us from the struggles of former years.” My face lit up with a smile that didn’t leave until well past the last word of the Agriculture Creed. 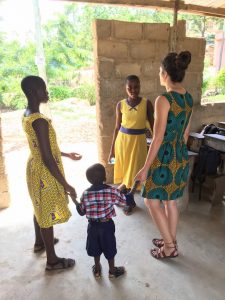 When I first asked students to learn the Creed for our LEAD (Leadership, Education, Agriculture, and Development) Workshop, I was not enthused about the response. There was little interest from the active 4-H members. My pleas were met with shoulder shrugs and glazed eyes over the course of two weeks. While I was on the verge of handing off the responsibility to the other school involved with the workshop, my co-teacher encouraged me to not give up.

So, I adjusted my strategy. I started by typing up the Creed and printed off ten precious copies each on their own half sheet of paper. At the next 4-H meeting, I hauled my laptop to the classroom and suffocated in silence as 25 students crowded around me and my computer to watch a video of last year’s National Creed Speaking Champion. Deborah Felicity’s passionate recitation had them hooked.

Over the following weeks, three prospects arose: Millicent, a confident speaker who was always chosen for public speaking roles; Agnes, rough around the edges but determined to win me over with her dedication to the task at hand; and Stella, reserved, shy, and exceedingly nervous in front of more than three people.

Because the Creed has five paragraphs and students from both schools attending LEAD were interested in reciting the Creed, we decided to split the job. We would recite paragraphs one, three, and five, leaving the remainder to students from the other school. After spending hours memorizing the whole thing, I knew this would be an easy task for my students.

The morning of the workshop, Agnes and Millicent were their usual bubbly selves, unfazed that they would soon be in front of a crowd with all eyes on them. Stella, in comparison, was a complete wreck. She stumbled over the words in practice, couldn’t make eye contact with anyone in the room, and looked like she might pass out any minute. Sensing she might need a little encouragement, I pulled her aside.

“Stella, how many times have I heard you say the whole Creed?” I asked.

“Oh, Madam. Many times!” she replied.

“Exactly. I’m going to be sitting straight across from you. If you get nervous about all the other people, just find me in the crowd and say the Creed straight to me. Pretend everyone else isn’t even there.”

She gave me a weak smile and a quiet “yes, Madam” before heading out the door.

Moments later, the girls were lined up behind the head table and the microphone was passed between the students like a baton in a relay race. Finally, with my breath held in my chest, the microphone reached Stella. Her eyes found mine in the crowd and I smiled encouragingly, nudging her into audibility.

“I believe…” and away she went, her eyes never leaving mine. With perfect clarity, voice, and enthusiasm, she 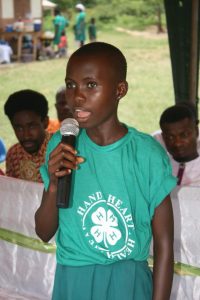 flawlessly recited her portion of the Creed. No one else in the crowd could have known how much work any of the students put into that simple speech, but I did. I sat like a proud parent, perched on the edge of my seat, hanging onto every word, positively beaming. I watched so intently I’m sure I didn’t blink, my heart simply bursting.

The program quickly moved on and I hurried to my next task helping organize the lunch procession. As I was dismissing a group of students, I was nearly knocked off my feet by the velocity of what I thought was someone trying to tackle me. Quite startled, I looked down to see Stella squeezing me.

“I told you I could do it!” she exclaimed through a smile, burying her head into my chest.

“You did amazing! I’m so proud of you!” I said, hugging her back. She didn’t let go right away and I didn’t move until she did.

Stella, the girl who never gets picked to speak in public, put herself out on a limb and proved to me, the crowd, and most importantly to herself that she has what it takes.

Looking back, the moment felt like a Hallmark movie with me cast as the selfless heroine who guides her students to self-actualized victory, but really, it was all Stella. She’s the one who practiced and faced her fear. All I did was believe in her. That’s all the best teachers really do. They don’t solve the problem for you; they guide you as you work your way to your own solution. And most importantly, sometimes they know all you need is an encouraging smile to get you started and a pat on the back when you’re finished.