I grew up on a farm in southern New Mexico and later, in Arizona. My father has been a vegetable farmer for almost 40 years. He too grew up on a farm, as well as his father before him. When I began to take on my first real responsibilities of irrigating fields, I was around 13. At that age, my father put me to work digging ditches and moving checks and irrigation pipe from furrow to furrow. It was hard work, especially in the Arizona summer. As I got older, my father promoted me to tractor driver. I learned how to drive on a John Deere 4020, as many can relate. From there, I learned to drive everything from John Deere 8000 series to articulated and tracked Challenger tractors. Since, I have logged over 4,000 hours ripping, ploughing, disking, planting, listing, and harvesting. Driving a tractor is something I greatly cherish and enjoy. However, throughout an increasingly mechanized system, I have lost the touch of manual labor. It isn’t something I shy from; instead, it is becoming something of the past. I love working with my hands and I didn’t fully realize how much I missed it until I arrived in Mensah Dawa, Ghana.

During the first few weeks of school, we began clearing the land for our 4-H farm. Most teachers accompanied the 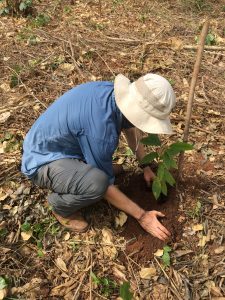 students to that first day, but none put in any work. I jumped at it as a way to not only start to understand how agriculture is done here, but also a great way to break the ice between my students and me. I wanted to be an equal, working among them, not standing there as their superior. Right off the bat, I broke my new cutlass. I quickly learned there are some woody shrubs that can’t be removed, even if you swing at it like you’re holding a golf club. That first day taught me a lot, and reminded me to pace myself in such heat and humidity. I have exposed my vulnerabilities of being a novice with the cutlass, yet, I volunteered at any chance to work alongside a farmer, as long as they are a little patient with me. From digging up cassava to harvesting palm nuts, it is the most valuable tool on the farm. Working with my hands reconnected me to the soil and plants like never before. I get a finer look at the crops we harvest and sow. It creates a connection to the land that makes agriculture a lifestyle. As the rains commence, and pick up in pace, I initiate transplanting the cocoa I have been nursing on my back porch. Individuals who have contributed to the project clear their land. Ten seedlings here, fifteen there; the amount is few but enough to kick start an aspiration. A desire, I hope, to achieve more than the status quo. It is a similar feeling I had when I decided to apply for AgriCorps. It could be a craving for new challenges or maybe a more selfless reason. Yet, what makes the two the most similar is the shift in perspective.

The immersion into this culture has opened my eyes to a non-materialistic life that has made me realize what really matters in life. Cultivating higher value crops will not be achieved without first shifting your perspective of agriculture. That is what I have fought to do. This battle has not been without suffering and redemption. I have become adapted to failure here, but perseverance permits growth. That is the same recipe farmers will use to succeed. It is the same process my father endured. He would always say, farming is a gamble, due to a volatile market, unforeseen weather, and disease. I plan to return to Arizona and begin developing my own farm with all that I have learned this year in mind.

Ryan Tomlin received a degree in Plant & Soil Science from Texas A7M University. Before becoming an AgriCorps Fellow Ryan worked as an agronomist for Robinson Fresh in the southwestern U.S. and Mexico.