As I climbed the gray speckled marble steps up yet another floor, I clung closer to the damp concrete wall beside me, always keeping one hand flat up against the cold surface. The stairs were slippery from the rain water that had fallen earlier that morning and there was no railing for me to hold onto, it had disappeared long ago. Every now and then I looked to my left and saw the hollowed out elevator shaft that had once carried people from floor to floor with ease. Light was shining down from somewhere up above and moss grew in the holes where the buttons once were mounted. Its very presence mocked my fellow AgriCorps members and I as we continued to climb.

The staircase was dark and musty but we kept moving up slowly and with each new floor that we reached I stopped and stood on the landing, peeking out down the long hallway of abandoned rooms. The floor was cracked and uneven, walls were missing between the rooms, paint was chipping or nearly gone on the walls that did remain, and water dripped quietly from the holes in the ceiling above. The place was silent and it was eerie. I felt like I did not belong, like I was trespassing on a very intimate part of this country’s history, a country I had only been in for 2 short weeks.

The fact that this once majesti 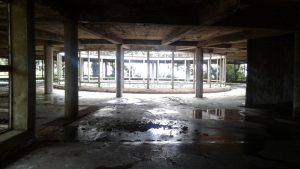 c hotel had been reduced to this was hard to comprehend. I caught myself wondering what had it looked like back when it had opened in 1959. Would there have been chandeliers hanging right above me brightening up this lobby? Was there music playing? How ornate were the decorations in these rooms? Who had wandered these halls before me? Who had vacationed in these rooms and what did they talk about as they lay in bed each night? How did it come to this?

Back in 1959 when the iconic Ducor hotel was built, it was the premier hotel in all of West Africa. In fact it was the only five star hotel in the region and people came from near and far to witness the grand opening. This new hotel represented wealth and power. It represented a rapidly expanding economy full of growth and potential. To the outside world, Liberia was flourishing and this hotel was just an outward symbol of all that they had accomplished. But underneath this façade, there were great inequalities leading to great turmoil between the socioeconomic classes which eventually erupted into one of the bloodiest and most devastating civil wars in Africa’s history.

Massive amounts of infrastructure were destroyed in the war. Some of the destruction was caused by the rebel forces as they plundered through the city targeting everything in sight, but a lot of the destruction came as a result of people just trying to survive. People had been displaced from their homes and farm 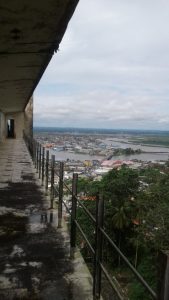 s, they had no food and no source of income and so they stole whatever they could find and sold it on the streets just to make a little money. From the Ducor, I imagine the first things to go were the obvious things like couches, tables, chairs, beds, mirrors, and paintings. After that, people began opening up the walls and stealing the plumbing and electrical wires until not a single thing of value was left in the entire structure. It had been skinned to the bones, completely devetated. The Ducor, once a shining light upon a hill in the city, was now just an empty concrete skeleton that served as a bitter reminder of the past.

I felt overwhelmed as I looked at all the destruction around me. So many things in this country are broken. So much corruption. So much hurt and so much pain. So many devastating stories that make my stomach twist and turn. Will it ever really get better? Why did I come here? How could I come here thinking that I could help make a difference?

And yet, somehow amidst all the destruction around me, as I stood there on the roof of the Ducor I began to feel hope welling up inside of me. Hope as I looked out on the colorful and bustling city below me, it was a beauty I had not yet appreciated from the ground level. Hope as I looked at the multitude of tropical plants creeping up through every single crack and crevice, their vibrant greens brightening up the dull gray of the concrete and their downright perseverance to survive anywhere bringing a smile to my face. Hope because I know that even in a place like this, a post-conflict country devastated by war, God is still here…He never left. Hope because my God is a God of restoration who is in the business of making beauty from ashes. Hope because of all the people I have already met in Liberia that have bright visions for what the future of their country could look like. Hope because I believe in the mission that I signed up for when I joined AgriCorps, that education and empowerment of youth can and will make a difference in the long run. 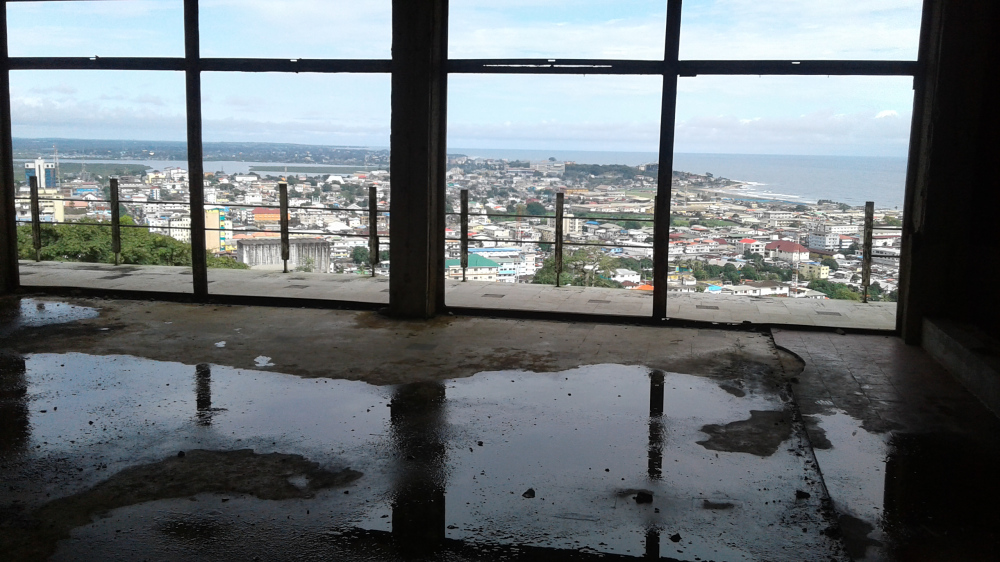