Tribal pride is a sentiment that has shone through every now and then in my observation of Ghanaians. Everyone knows who is native to the region and who is not, what foods they’re known to eat, cultural differences, reputations – the list goes on. It creates a variety of interesting situations. A group of locals might give a member of a distant tribe a hard time for being so far from home, or two tribemates will connect over common language or food.

I’ve been trying to determine if there’s a social equivalent in the United States, and the best I can come up with is heritage and ethnicity. I know that I’m three quarters German and a quarter Norwegian, and it’s shaped my identity to an extent. My blonde hair, blue eyes and fair skin give it away, just like some tribes are known for certain physical characteristics. I enjoy sauerkraut, meat and beer – heck, I may as well own a pair of lederhosen. My brief visit to Munich last summer made me feel right at home, as if I had become a little more connected to my heritage. Like tribal connections, descent can bring people together.

Recently, I managed to meet a fellow German; however, this German did not have blue eyes or blonde hair, and probably hasn’t tried sauerkraut. About two weeks ago, Mark was talking to me about a farmer he wanted us to visit. “He has a vast land, right next to the river.” My ears perked up. Dry season farming is rare in Buipe, and I was excited to see a farm that could potentially be irrigated. Mark went on to describe the farmer, who is a teacher at the local junior high school and farms on the side. “I don’t rightly know his name,” said Mark, “but the people call him ‘German Soldier’.” Now I was really interested. 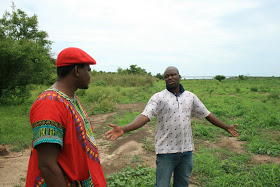 We rode into town a couple of days later to meet German Soldier at the JHS to set up our visit. He greeted us upon arrival, a stout Ghanaian a couple of inches shorter than me with a broad smile and an intense gaze. We sat beneath a tree and talked about his farm – he described the two gardens he has at his house and the land he has next to the river. He talked about all of the work he had done to clear the land next to the river, which was previously forested. “How much land do you have next to the river?” Mark asked. German soldier thought for a moment and said, “I should say about fifteen acres.”

My eyes bugged out. Fifteen acres? I thought. And he cleared it by hand? German Soldier went on to say that his top priority is fencing in the plot by the river to prevent cattle and other animals from consuming the crops he plans to cultivate there. The passion with which he described his land was contagious. After he had answered all of our farm-related questions, my curiosity brimmed over and I finally asked, “What is your real name, anyway? And why do people call you German Soldier?”

He flashed a proud smile and said, “My name is Abdul Wahid, and I am known to be a very hard worker. Here, when we see a hard worker we associate them with the Germans, who are very industrious. So when people see you work hard, they call you a German. I am disciplined and tireless like a soldier, and when you put the two names together, you get German Soldier.” I sheepishly told him I was of German descent and that I hoped to honor the reputation, but knew that I couldn’t possibly compare to a guy who cleared 15 acres of trees by hand.  We thanked him for his time and departed, agreeing to meet on Wednesday, which was a national holiday. 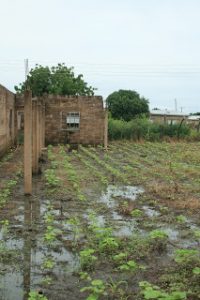 Mark and I met in town and rode to German Soldier’s house, where he showed us his gardens. He had some small lettuce beds behind his house which had already been harvested, and he proceeded to show us the lot adjacent to his house. The owner of the lot was in the process of building a house and passed away, leaving behind walls and an empty yard. Abdul viewed this as an opportunity, and received permission to grow okra and peppers in the lot until its fate is sorted out. There was no wasted space to be found – I was impressed.

Mark and Abdul hopped onto Mark’s motorbike and I pedaled feverishly on my bicycle to keep them within view as we ventured to the riverside plot. A series of rocky, winding paths led us to a large house, which belonged to a Dutch couple who intended to make it into a hotel. They had given German Soldier the land which he had been telling us about. After dismounting and passing through a few makeshift gates, we came to a vast clearing carpeted with tangled vines and weeds. The Black Volta River surged past just 200 yards away.

German Soldier walked us around the property and reiterated his desire to fence in the plot and purchase pumps and sprinklers for dry season irrigation. He spoke of cabbage, cauliflower, tomatoes and a host of other vegetable 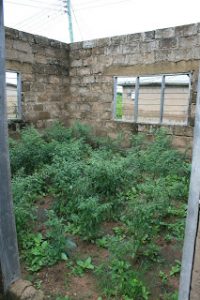 s – I could practically see them growing right in front of us. He even had a couple of ponds that could support fish if managed properly and I salivated at the thought of some delicious tilapia. He pointed to one tree in the middle of the plot, explaining that he left it so he could rest in the shade. I had a hard time believing that this man even slept, so it was difficult to imagine him just relaxing under the tree.

Near the end of our visit, Abdul explained to us that one of his main challenges was lack of access to funds. His wages as a JHS teacher only allow for a small amount of spending on the farm, so progress is slow. He mentioned that he had applied for a loan and was turned down with no explanation. It’s a story that I’ve come to hear many times in my interactions with farmers. Credit is difficult to obtain and when loans are approved, interest rates are incredibly high.

The theme of my visit to German Soldier’s farm runs parallel to the theme I’ve seen throughout Ghana – potential. It’s everywhere, just waiting to be tapped. People have dreams and the drive to make them a reality, but are hindered by a variety of factors. Vast lands lie fallow, but are owned by someone who may not have the desire, knowledge or ability to cultivate crops. The demand for vegetables will climb during the dry season, but irrigation technology is scarce and expensive. Many of these problems are too large for me to tackle alone, but my hope is to help solve them one person at a time. Helping one farmer acquire a loan, inspiring one student to try a new method, helping connect an extension officer to a group of people seeking new knowledge. It will take time, but I’ve learned that with time and a tireless work ethic like that of German Soldier, anything is possible.