You all know poverty. You’ve seen it on TV; you’ve seen it in your region’s city center; you’ve seen it in rural areas; or maybe you’re living in it. The majority of the world’s population live in poverty–3 billion people live on less than $1.25 per day. Even I, growing up in an affluent and quickly emerging Maryland county came in contact with poverty quite often. Most of the time the thought of poverty that is close to us leads to a discussion about politics. So often our discussions lead to arguing back and forth about the cause of our local poverty and how government policies can fix it. It is important for us to recognize that there are different and troubling socioeconomic situations for many of the world’s people, but the real concern should be why aren’t we making progress like we should? Picking up my life and moving it to Liberia, one of the poorest countries in the world, has invoked a lot of thought and inner struggle on this very question.

I walk through the market and wonder about how the development of Kakata (our city of about 30,000 people) would progress if they changed the way they did business. I dream of a day where I don’t pass by the market women, ALL fifty of them or all one hundred of them selling the EXACT same things as the woman beside them, competing against each other for customers, and lowering their prices just to make enough to survive. I often wonder about how can we get these women to stop buying produce from a market outside the city, selling at the market in the city of Kakata, and accepting a less than 5 cent profit for every piece of produce. I am by no means an economic development expert, but I wonder what would happen if all of these market stands, all of these Kakata women began to cooperate and incorporate–maybe into a Liberian grocery store or clothing store or supplies store. Everyday I think of different ideas just like this one, and I research them. I engage my mind in something that could eventually turn into a meaningful poverty solution.

The importance of thinking, researching, and engaging is not that your ideas are always correct, rather that 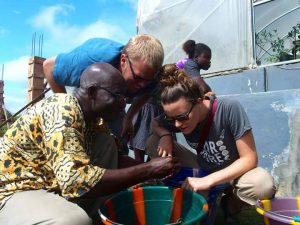 you are engaged and open-minded. By now we know that there is no golden key to fix the world’s poverty cycle or else we would have used it already. What we do know is that the answer is complex, multi-faceted, and requires people to actively be engaged and passionate about finding solutions together, alongside with the people that they want to serve. I guess one of the major things I have learned from my experience so far in Liberia is that I was wrong when I used to talk about poverty like it was only a political problem. Like it was a problem that could be fixed only by policy. Like it was a problem that had a single, political answer. My students, while recently learning the FFA creed (Liberian version), asked me what was the meaning of the line “a faith born not of words but of deeds” I told them it means that our faith in agriculture should be demonstrated for all to see by the actions we take, not just the words we say. I think it means that we should show faith in mankind’s ability to break free of poverty by taking action. To show faith in the people around you…to see them as people who can create change rather than people who are simply waiting for change to happen to them or for them. To show your faith by taking ACTION.

What I have come to realize is that poverty is supremely, a social problem. In Liberia, the entrepreneurial spirit is vibrant in some individuals, but ultimately it is not making the impact that it should. The women in the market accept the small profit margins that they receive, and therefore they accept the poverty in which they live. It’s not necessarily their fault, but it’s their reality. The government doesn’t really believe 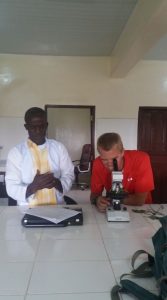 that they are worth investing in and unfortunately, neither does their society…no one sees them as being able to make an impact, no one allows them to dream, no one enables or supports them to take a risk or to be entrepreneurial. In contrast, one could say that the U.S. is the world power it is today chiefly because of an impactful entrepreneurial spirit that led Europeans to search for a better life in an uncharted part of the world. Yet, that same entrepreneurial spirit, that belief in the inherent goodness, productivity, and ability of human kind has somehow left behind or completely forgotten large portions of our society in the midst of their poverty. In this way, through inaction and disengagement and lack of faith in people, poverty is a social problem.

New democratically agreed upon government policies are necessary, but without unified social engagement and faith in our poverty-stricken people, whether in your local area or halfway across the world, they will be rendered useless against the power of poverty. Don’t just talk about your local poverty cycle–think for yourself, research solutions, and engage in action alongside those you want to see lifted out of poverty.