She skips across the compound to a door hanging half off the hinges and motions for us to come over. Three women crowd through the narrow doorframe into a dimly lit room. The room is filled with corn cobs stripped of their golden kernels, pots, pans, gifts amassed from past visitors, but her eyes fix on a large white bag covered in a thin film of the Harmattan’s dust. Mischief crawls across her crooked smile as she bends over to inspect the bag, like a kid on Christmas sneaking downstairs to go catalogue the presents under the tree before her parents awake. The four women work in unison to push the 50 kilogram sack upright, and begin to peel back each of its three layers one at a time. With each new layer their anticipation grows. 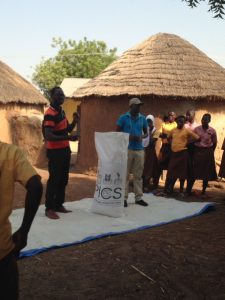 Two and a half months still remain until the opening ceremony, but my host grandmother wants to check on the maize she supplied for the PICS bag demonstration. The training she attended last month boasted that the bag could reduce post-harvest losses to aflatoxins and weavils, but these are things that she has come to expect over the years, and she is still skeptical that anything can truly be done. She looks over to the corner of the room where a smoky-grey pile of pepper remains a haunting reminder of the crops that never made it to market, of the hard work that never materialized into income for her family. Though she had covered the produce in ash, a strategy passed down for generations, the treatment was still not enough to preserve her pepper until it could be sold. This year would be different; this year had to be different.

She peeled back the last layer and dove her hands into the plump yellow kernels, raising her hands up to the sky and letting them fall like rain. A minute of inspection and she was satisfied. Healthy and untouched, the maize looks as perfect as the day she filled the bag two months ago. She tied each layer of the bag and pushed it back to its side, careful to mask any signs of it having been opened before the upcoming ceremony. Returning outside, she steps into the heavy two o’clock sun. She stands confident that in just over two months her neighbors will all see the wise investment she’s made. 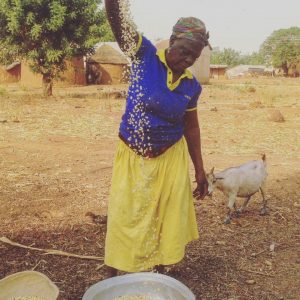 This is what lasting change looks like. Hesitance is overcome by experience. Farmers survive by their stubbornness. The wind, the rain, the lack of rain, all beat against their success each year. With each challenge, farmers look into their past experiences and find the tool to be utilized. As an extension agent in my community this year, therefore, to encourage farmers to abandon that skepticism on faith alone would be to take away a piece of their resilience. While progress may, at times, seem lethargic and stagnant, I learn each day that it is more important to give farmers opportunities to see alternative methods and make decisions for themselves, even if it means I may not see the changes manifest while I’m here.

Erik Jorgensen received a bachelor’s in Animal Science from Cornell University. Before becoming an AgriCorps Fellow Erik served as an agriculture affairs intern in Washington, D.C. and a cheese production intern in Italy.