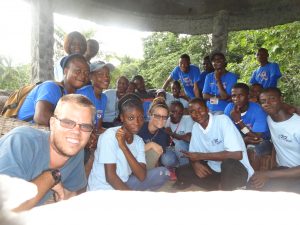 Usually the night before a big event with my students, like most teachers or FFA advisors, I am up worrying and worrying…hoping that the next day will go well. Hoping that I remembered to do everything, call this person, remind this person, print that, or purchase this, hoping that people actually show up. I can make myself so anxious I barely sleep sometimes, but this evening was different. I had a big event tomorrow, a field trip with the FFA! We were taking 20 students off campus to ‘Wulki’s Farm’ which was about 45 minutes away. I didn’t have the bus driver’s number, I hadn’t purchased any food for the trip tomorrow, I didn’t have the list of the names of students who were going, I didn’t even have the name of the tour guide who was supposedly taking us around the farm. How could I not be panicking??? What kind of advisor was I?! I had done nothing, absolutely nothing! Ahhhh, but that was the beauty of it. This time, I wasn’t the one in charge. THEY WERE.

For the past few months the students had been begging me to go on a field trip. I tried planning one (mostly on my own) the previous month and let’s just say the results were not too good. I did all the planning, all the organizing, and lined them up with all sorts of activities I thought they would enjoy…but when it came time to commit and pay for the field trip … crickets. Only 1 person signed up and paid. I was definitely a bit hurt and offended that I had worked so hard to put this together for them.  It was something that they said they wanted! So when the idea came up again that they wanted to try planning another field trip, I was a little less than thrilled to be a part of it all over again. I told them I didn’t think we had time to plan another one, but also I really just didn’t want the stress or to be responsible for another failed event.  I had month remaining in Liberia and I could see a free Saturday lounging around Kakata in the near future. However, the students insisted and sensing my hesitation, they said they would plan the whole thing. Plan the whole thing? Hmmmmm…..let me think about this….

My internal dialogue went like this: On one hand, this could be really good. Really give them an opportunity to use their leadership skills, work together as a team for one common goal, practice responsibility, and put into practice things they learned this year. This could be a great last project for them, an amazing way to end the year! But on the other hand, I’m tired….and what if I give up complete control (yikes!).  What if it doesn’t happen at all or it’s a complete disaster?? What am I worrying about…it probably won’t happen. Just say “yes” we can do it and see what happens. When you think about it, you have nothing to lose and they have everything to gain if this works out…. Give them a chance, Anna! Believe in them!

Right away they assigned two people to be on the planning committee. The next week, Amos gave a report on how the field trip planning was coming. He said he had paid his own way in a taxi on his free Saturday to go to the farm, talk with the tour guide about dates and negotiate price. Wowza, a sophomore in high school taking that kind of initiative! That’s awesome! The next thing I knew the treasurer, Joseph, said he had spoken with the owner’s wife at church and was working on negotiating an even lower price for our FFA group. Even better! The club members were impressed too and visibly getting excited. Being around their energy, I myself couldn’t resist getting excited too.  I found myself thinking “this could actually work!”

The following week Amos and Harris came to me after school to write letters to the administration asking permission to go and possibly use the school bus. When I got word that our request to use the bus had been rejected, I got discouraged.  I knew rending a bus would instantly double the cost of the field trip. I was ready to quit, but luckily they weren’t. The leadership already had a back-up plan and the president quickly started working with the local bus companies to negotiate prices. This task is “no small thing-ooo” as we say in Liberia.  It requires walking around to different taxi stations in the city, a lot of back and forth dialog/debate about prices, and finally staying on top of drivers to make sure that they don’t accept any other offers for that day leaving you high and dry. Josephus worked tirelessly and each time we spoke over the next few weeks he always had a new lead or update he was following. Meanwhile, Harris and Amos were also busy writing/delivering letters asking teachers and community members for donations to help fund the trip. Sounds easy enough, but in Liberia this is no easy thing! Letters have to be written and delivered by hand and they delivered 17 letters 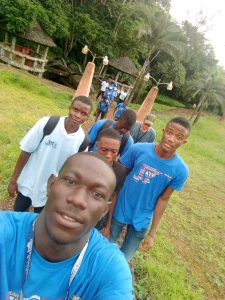 While the planning committee was out chasing money, the publicity chair Patience and her group were out advertising the event.  Their publicity worked and soon the treasurer started collecting the funds from people. Before I knew it, we had at least 14 people signed up! The treasurer had detailed records for everything, neat and organized. In a country where corruption and thievery is rampant, (even among student groups) and where organization skills are not always highly valued, his perfect little entries in his notebook were such a beautiful thing to see! People trusted Joseph, people trusted the FFA and each day it was becoming more clear why. These students were different, these students had pride in their work, integrity, ambition, they were honest and sincere, they cared.  These students were real leaders. They embodied every values and mission of the FFA. I don’t know how they ended up with me here in the FFA but I’m sure glad I was getting the chance to work with them.

The trip ended up being a great success.  We played games, sang songs, and even got to see  many things they had never seen before! I will always remember that trip as one of the best days of my AgriCorps service.  Why? Because it was visible how proud our FFA members were of themselves for organizing this trip entirely on their own. It was a humble reminder for me how important it is to build up and encourage others around you, to believe in people. It’s amazing what people can do if you just believe in them.