As I walked outside, I heard the grass crunch under my shoes. The wind blew against my skin and I felt my hair lightly brush against my cheek that was warm from the now fading Texas sun. As I sat on the ground, to look out over the hill, I snapped a leaf of sage from a plant behind me and began to rub the fuzzy green leaf between my thumb and index finger, releasing a scent that seemed to relax me as I took a long breath in then I released it. The longer I sat and watched the sun fall behind the horizon, the sky shifted from bright pink to a vibrant orange that appeared to set the sky on fire. The cattle began to come over the hill and closer into view, and at that moment, I noticed two tan ears perked up through the tall grass. Is it a deer? I thought to myself. Suddenly, it lept! It began to run across the pasture in front of me. It was a deer, followed by a fawn that was just learning to be confident in his legs as he tried hard to keep up with his mother. As they ran to the south, a storm began to roll in and guided my attention to the streaks of light that were now scattered through the still darkening night canvas in front of me. The smell of rain entered the air as I thought to myself, I cannot just be here, I have to be all in.

Almost a year ago, I was between my junior and senior year in college and was trying to decide what in the world I was going to do with the rest of my life. I went to a meeting about AgriCorps my sophomore year of college and the thought of becoming and AgriCorps Fellow lingered in the back of my mind. My junior year, I heard about it two more times, and had started to think very seriously about applying. Around September 2016, I decided that I wanted to become an AgriCorps Fellow and move to West Africa to work in agricultural education and extension. I was going to fly half way across the world to do something I had never done before… and of course, I felt scared. Scared that no one would understand why I was going. Scared to leave my family. Scared that I would fail. I feel like it’s these moments in our lives where we have decisions to make that we sometimes learn more about ourselves than we ever really wanted to in the first place.

I decided that in whatever decision I made, I couldn’t just decide to be there, I had to decide to be all in. I asked myself, what 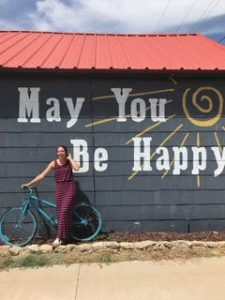 would be the decision that I could wholeheartedly throw myself into and believe that no matter what went wrong, I was making the right one? What was the decision that would allow me to learn more about the world and myself in ways I didn’t know were possible prior to going? What was the decision that was going to make me a better agriculturalist and also a better person? I remember sitting in my living room with my mom, watching a documentary about young women in schools in Liberia and I remember thinking about how strong and passionate they were about learning; I felt a small tear roll down my cheek…this was the moment that I realized that I did not just want to pursue AgriCorps, I had to. For myself; not for anyone else. I was so excited to tell my family and my friends and have had so much support from everyone around me. I’m beyond excited for the journey that’s going to take place this next year. I know there will be times when I miss home and when I miss the feeling of my mom’s arms around me, but I also know that because I truly want to do this, it will all be worth it.