My eyes shot open. It was early. The sun was just about to rise. Today was the day I had been impatiently waiting for—my 4-H Club would finally begin work on our farm. The PTA Chairman, Mr. Appiah, was kind enough to lend us an acre and a half of land. The chief and elders had invested in me and I needed to show return on that investment. I felt pressure to perform and make the most of every inch of land. In the days prior to breaking ground, my anxiety was beginning to swell, for I knew the rains were soon to cease, and the wet season would transition to dry. My window for something large scale would close if we didn’t get seed in the ground soon. 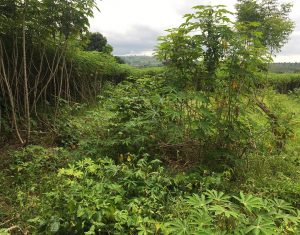 This acre and a half would be my research plot, my sanctuary, and most importantly, the place I would motivate my students to pursue agriculture. An integral part of the experience to me was to be working side-by-side with students; leading by example. Little did I know, these kids would work me into the ground that day. On my way to school I imagined all the possibilities, I looked at this as my PDC or product development center. Here, I plan to develop the student’s interest—cropping systems to maximize yield and an extension center for local farmers.

The time finally came. We grabbed our dade—cutlass in Krobo—a blade similar to a machete. I consider the dade to be the briefcase of Ghana. We marched out to the farm, which is about a ten-minute trek into the bush. Mr. Appiah wanted it near his house to keep a close eye on it and act as a deterrent to thieves. There are two plots, one up the hill in the middle of a cassava field that is about an acre then another one at the bottom of the hill up against the river that is roughly half an acre. We plan to grow row crops such as corn and cowpea at the larger site and vegetables at the smaller one. The river will supply us with water most of the year but it most likely will not be practical to maintain the larger plot during the dry season. We split off in two groups. Sir Alex, the co 4-H Advisor, with the primary kids down at the small plot and myself with the JHS students up the hill. 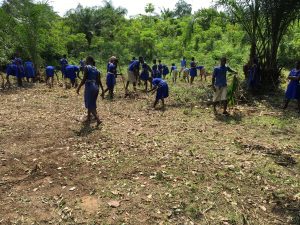 We got at it. The grass was tall and thick but it was no match for the cutlass. As some cleared the grass, others collected old cassava stalks and piled them up to be burned later. The smell of fresh cut grass was a friendly one, but the heat and extreme humidity was foreign. My hat was soaked with sweat; the brim became saturated and began dripping in front of my face. I rung it out but there was no escape. Spaced through out the area were small shrubs. I took a swing at one and it bent the blade of my cutlass! I was disgruntled having just purchased it, but figured it only adds character. Many hands made light work as we cleared the whole plot in under an hour. I couldn’t have been more proud. Finally, I felt as if I was making progress in the community. 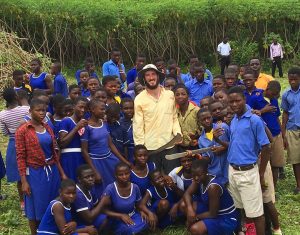 It is easy to forget the strength of humans on modern farms. Back-breaking work is a thing of the past with GPS guided tractors that can pull implements that rip, till, and smooth the soil all in one pass. On the contrary, one farmer here is only able to maintain a few acres. I appreciate what we have in the United States; however, I have grown to love working more with my hands alongside my students. I notice the smaller things more often; therefore, I feel a much greater connection to the land and people than ever before. I believe the bonds made during this fellowship cannot be broken and I will cherish these moments for years to come. I just hope to have as big of impact on these kids as they have had on me. Without a doubt, I know this is where I am supposed to be at this moment in time.

In Loving Memory of Jacob Nagode

Ryan Tomlin received a degree in Plant & Soil Science from Texas A7M University. Before becoming an AgriCorps Fellow Ryan worked as an agronomist for Robinson Fresh in the southwestern U.S. and Mexico.