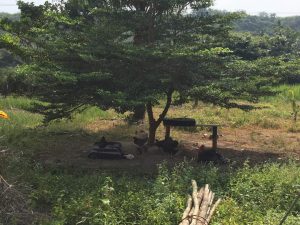 It sits ominously on the top of the mountain overlooking my entire life. Shrouded in mystery, some believe it’s owned by the Master Divine Drummer himself, while others would claim the owner is a German who comes around once a year to show university students what a poor Ghanaian village looks like. Either way, it’s untouchable for people like me. As my gaze follow
the ridge I notice that the cassava farm on the hillside looks a little parched. Indeed, the Harmattan has done its duty. I wonder when the rains will come again. Some say late March, others claim that it’s not ‘til April. Uncle John told me yesterday that it’s supposed to rain in March but not in April. But sometimes when March stays dry, the rains finally come in April. Lately it’s just been too unpredictable to get a proper handle on guessing the weather. The only thing safe to assume is that it’ll be hot and dry until it’s hot and rainy. My gaze drops from the mountainside to the tree directly in front of me where beneath its low branches reclines a wiry young Ghanaian businessman on an old mattress. Mamudu made himself a bench under the small shade tree behind the palace, for relaxation purposes and business. His distinguished guests (usually Nana’s kids) are offered a set of luxurious, gray seat cushions from an old car. I’m not even sure when they showed up, but Mamudu does things like that.

“Everything is cool. How are you Mister Lee?”

“The turkey has laid eggs, and so I’m watching her to see where she has pu
them.”
Mamudu is a part-time poultry farmer, full-time owner of a tar distribution company, and perhaps the kindest, happiest man on
earth. We had both contemplated the value of constructing a home-made incubator to take the hatching business to the next level. Mamudu decided it wouldn’t be worth the extra effort nor would it be very cost-effective, and so he’s continued to use nesting chickens to incubate the eggs that he sees the other fowl laying. He takes the hatched chicks and puts them in small pens where he can observe and feed them. That was until the ants came

Just over a week ago I returned to Akatakyiwa from spending the holidays abroad. On the day following my return I was tending to my garden behind the palace when I heard the sound of a motorcycle approaching. I peeked around the corner to see Mamudu parking and dismounting his blue steed. After our customary greetings and questions about the holidays, I remembered the chicks he’d been collecting before I left. since my return, I’d heard nothing from the chicks but thought nothing of it, since my observation skills often leave a lot to be desired.

“How are all of your chicks, Mamudu?”

“So many (meaning A LOT) of these small ants came and killed them. I left for Yamoransah for two hours and when I came back,
all of them were dead. Thirty chicks Mister Lee.” 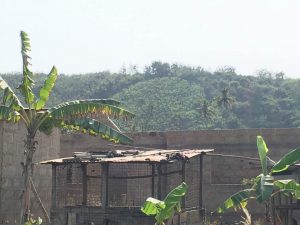 My heart sank. Mamudu had worked so hard and cared so much for his thirty baby chicks. He’d even poured used motor oil around the cages to deter the ants from coming. Despite Mamudu’s efforts, in less than two hours an army of vicious, hungry ants had destroyed his young flock. By now I could tell that the usual joyous and relaxed Mamudu was deeply troubled by this latest development. Instinctively I began offering solutions to his problem. “Have you tried putting them in cages with legs in cans of oil?” “Have you talked to Kwame Otto, the other poultry farmer in Akatakyiwa?” Though these questions got him thinking, it didn’t do much to raise his spirits or solve the problem. Realizing that I wasn’t really helping, I stopped talking. We stood quietly, our eyes staring at our feet for what felt like a few minutes.
Finally I broke the silence and looking up at him said, “Mamudu, who’s smarter, you or the ants?” As I paused for emphasis, his confused look told me he didn’t understand what I was saying. Excitedly pointing at my head, I again asked, “Mamudu! Who has more brains, you or those ants???”

Slowly, a smile began to light up Mamudu’s face. Pointing at his chest, he replied “Me!”

Our conversation ended there, because there wasn’t anything more that needed to be said. We both walked away from that
conversation with a smile. Mamudu was reminded that he is indeed at the top of the food chain for a reason, and he regained the confidence in his own ability to solve problems. I was reminded that I’m not in the business of offering solutions, but I’m in the business of offering hope. Edward Hale perhaps says it best, “I am only one; but still I am one. I cannot do everything; but still I can do something; and because I cannot do everything, I will not refuse to do the something that I can do.” As much as I want to see Akatakyiwa be the epitome of agricultural excellence, a center for innovation, and the homeland of future world leaders, I cannot be effective unless I start somewhere and do what I can. As quoted by Andrew Carnegie, “I shall pass this way but once; any good, therefore that I can do or any kindness that I can show to any human being, let me do it now. Let me not defer or neglect it, for I shall not pass this way again.” 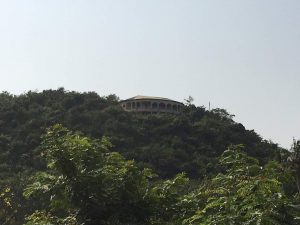 As I glanced back up at the ominous mansion on the mountain, I wondered what someone living there would think about whenthey looked down at this tiny world of Akatakyiwa. Would they see us as a poor African village or individuals with hopes, dreams, fears, and anxieties? Perhaps the mansion reminds me of the person I once was,
back before I made this place my home. With just as much certainty as I can say I was the of the former view when I started, I can now say that I’m of the latter. The learning curve is steep, and I’m constantly the subject of entertainment as I stumble around in the local language. But maybe, just maybe, I can change one life for the better. I’m reminded that as all healthy bodies of water, we were never designed to be merely a receptacle for blessings but rather a conduit. Easier said than done, but I’ll figure it out.