I walk into the classroom and grab a piece of chalk. Some students have gathered, but most of the wooden desks remain empty. I turn to the dusty chalkboard and begin to write: 4-H MEETING. As I write the agenda on the board, I hear the school bell ring. A voice calls out, “4-H Meeting, please!” It rings again. “4-H meeting!” The room begins to fill with eager students, and as I see the president take his seat in the front of the classroom – red homemade gavel in hand – I can’t help but smile. Just over four months ago 4-H was nothing more than an idea in my head. When I arrived in my community, I wanted to be a 4-H advisor. I wanted to be a voice of reason, a support system, and an educator for an eager group of students interested in agriculture, but how would I manage that if the group I intended to advise didn’t even exist? The answer for me was a simple one: start it. For me it was a lot like starting a business, except there’s no startup capital and the target market is a group of unruly Ghanaian teenagers.

I first decided to get all the teaching staff at my school on board with the concept of 4-H. They hopped on. This was immediately followed by me sharing my story and passion for leadership and agriculture with the students, hoping they would be interested in joining the new club in town. They signed up, I was in business. As the weeks and 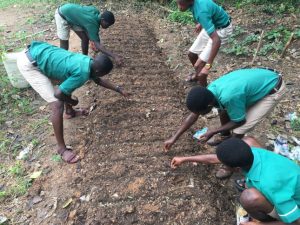 months progressed, my optimism for the survival of the club fluctuated with an upward trend. In October, we had a second garden established, and by December, we had added snail rearing to our growing repertoire of 4-H farming activities. Today when you come to our school, the students will show off their third garden filled with raised beds for green pepper seedlings, yet to be transplanted. Some of them will begin to tell you about their personal projects they’ve started at home, while a few may tell you about their progress in memorizing the Agricultural Creed. But if I only spoke of the successes of the Akatakyiwa 4-H club, I would only be sharing a small portion of the full story. In fact, from the very beginning, there’s never been a time when I could sit back and say with confidence that everything is happening exactly as I had intended or anticipated. Gaining commitment from students and maintaining order during meetings has proved to be quite difficult. There have been instances when the president has left the 4-H meeting out of frustration, and it’s only recently that a few of the most committed students have put in effort to water the school garden each morning. Nevertheless, I remind myself that handling such difficulties are just part of the process.

Outside of establishing and maintaining the 4-H club, the role of a 4-H advisor is quite complex. “Being older than the rest of you, I am asked to guide and support you from time to time, just as the walking stick supports the wise. I am dedicated to the success of 4-H members, as I firmly believe that investing in agriculture and empowering youth will bring a bright future for…our world.” This statement is recited at each meeting, and it reaffirms our belief in the far-reaching impact of every 4-H advisor. As a proponent of agriculture education, allowing the students to learn through participation in activities is essential in the learning process. Each of the members are encouraged to start an entrepreneurial project at home, and I, as the advisor, have the unique task of ensuring their success. This includes teaching the skills needed and offering personal support to members as they work on projects.

One of the more important factors of success in any of these projects is the ability to keep records, hardly a practice observed by most Ghanaians. To date, our secretary has had difficulty making a complete set of meeting minutes, and we have no records of the gardening activities from the first and second gardens. Though such mistakes aren’t critical, it has brought to the forefront a deficiency in my efforts to prepare my executives to handle their roles. The 4-H executives ought to be the trendsetters in practicing these skills, and I must lead by example. I’ve realized that every decision I make and every idea I have for the 4-H passes through them. The 4-H is inherently designed to be a student-run organization, and it’s the elected officers who guide the rest of the members through these important decisions. “From time to time” – especially in the early stages of the club’s formation – I did take the initiative without input from students, but it is certainly the exception and not the rule. The reason for leaving decision-making to the students is two-fold: 1) to gain commitment there must be a sense of ownership among the members, and 2) my time with them is temporary. In lieu of the second point, I have invited a teacher who is passionate about agriculture to act as a co-advisor while I’m here and sole advisor once I leave. Her name is Nancy, and she is one of the most wonderful people I’ve ever known. Both of us have been spending a lot of time with the current president of the 4-H, Joseph Ackom.

Joseph is without a doubt the most respected student in the whole school – and rightly so. The adopted son of a 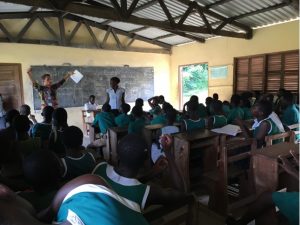 chief, he works harder than anyone I’ve ever met in this country, conquering every assigned task without a single complaint. When he was first elected, speaking in front of 70 of his peers scared him to death. This was made worse by the fact that his English was not the best. Him being president has given me reason to spend a lot of one-on-one time with him, preparing for meetings, discussing decisions to be made, and reviewing the current state of our club. Though he’s not yet at the point where he can control his rowdy peers, he’s become confident enough to speak loud and proud in front of them. He’s memorized the opening ceremony and has recited it in front of the club multiple times. His English has also drastically improved – almost to the point where he might be the most fluent in the school. It’s things like this that make being a 4-H advisor worthwhile. I’m confident that the skills this young man learns today will contribute to his ability to envision a brighter future for himself, his family, his country, and his world.