The suspense hung in the air as Professor Aaron Asare of the University of Cape Coast closed the novel cowpea seed presentation and it was time for the National Varietal Release and Registration Centre Committee to decide which varieties to take to the National Seed Council. Everyone shuffled outside the room as the gears behind the minds of the committee started to turn as they analyzed the value chain benefits of the presented cowpea varieties. Members of the committee included: Ministry of Food & Agriculture (MOFA) agents, National Seed Council members, and other professors of the University of Cape Coast. They were given the difficult task to analyze all components of the cowpea chain from the farmer to the consumer including data from tonnage per hectare to cooking time. These varieties were developed by Prof Asare’s lab group over a 10-year period and in some cases, the high-yielding peas had an estimated 70% farmer return on investment, which included properties such as resistance to Striga (a common cowpea virus), early maturing, and drought resistance, qualities never seen in cowpea varieties.

Cowpeas are a staple in Ghanaian dishes where they are found within the spices of Waakye, smothered in palm oil in

Red Red, and a classic in beans & rice, yet Ghana is still a net importer of the legume despite everyone eating their share. To this point, cowpeas have been predominantly grown in the northern regions, but Prof’s presentation showed yields could potentially be higher with new varieties for the higher-yielding soils of the southern regions, such as the area around the University of Cape Coast. Test plot results looked promising as these new seeds grew so popular with farmers they proposed the variety names of Beng-Wonbila and Kum-Zoya, which in the local languages mean “Cowpea that Does not Fear Striga” and “Hunger has Run Away,” respectively.

The call came for us to return to our seats and everyone filed into the room to hear the good news the committee was about to share. The media stood at the ready as the flickers and shutters of their cameras captured the moment. The chairman of the committee stood in front of the room saying, “Today we have decided that four varieties of cowpeas will be selected to go to the National Seed Council.” The audience erupted in applause as the room knew the significance of this moment, making it the first time a Ghanaian university has produced new cowpea varieties. Immediately Prof had a huge look of relief on his face at the meaning of this announcement for his lab, the Central Region, and Ghana.

With the announcement it was time to celebrate and we travelled to the University Vice Chancellor’s house where a banquet was awaiting our arrival. The University colors of blue and yellow adorned the chairs and gazebo as the media waited off to the side to hear from Prof on what these beans would do for Ghana. As I sat down to lunch with Prof, I asked him what he was feeling in the moment, but I knew his response before the words left his mouth: “This is the greatest accomplishment of my life and it was certainly more stressful than my PhD defense. Now let us celebrate as when you do something great you want to be recognized.” 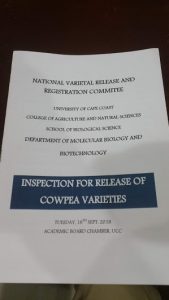 In fact, we’re all waiting for that one moment in our lives where we are recognized for the work we’ve done, where everything just seems to go right. But being able to have that moment does not excuse us from taking the next step. When asking Prof how he would deliver the seeds to farmers, he commented on how his work was not over as he must play an active role to get seeds to farmers for the 2019 major rainy season. When asking how this should be done, he discussed options in delivering seeds to the local MOFA offices and educating farmers through demonstration farms. As Prof explained, “To get farmers to adopt the cowpea you must demonstrate to them the benefits of the seeds. Faith is a demonstration of what people were able to do many years ago, that’s why so many people believe in religion today and we have to do the same for farmers.” If we can show farmers the benefits of these seeds upon previous varieties through demonstration farms and this leads to adoption, then the possibility to see Kum-Zoya in Ghana will become that much clearer.

Conor McCabe received a degree in Animal Science from Cornell University. Before serving as an AgriCorps Fellow Conor was active in 4-H and Agriculture Future of America.