It wasn’t uncommon for high schoolers to wear the FFA jacket as an everyday jacket in the 70s. My first jacket was less than $20 and served me well for many years. My jacket is over 40 years old and since it is FFA Week, I thought I’d share a few of the journeys my jacket and I shared.

My first recollection was the day I received my jacket. Anyone who has owned an FFA jacket, fondly remembers the stiffness and crispness of the FFA jacket – nothing feels or looks better. When I was in high school at Bluffton, the vo-ag boys would wear their FFA jackets as an everyday jacket. This was exactly what J.H.Gus Lintner envisioned when the 29 members of the Fredericktown FFA Marching Band donned the jackets in the 1933 National FFA parade. Here’s a video where Dr. Lintner shares his personal story on the FFA jacket.

The FFA jacket can provide students with numerous memories. Memories of state and national conventions, judging contests, and chapter FFA banquets. One of my first memories with my FFA jacket my participation in the Parliamentary Procedure Contest. If you were a member of the FFA, you know parliamentary procedure, and after all of these years I still cringe when someone “moves to make a motion.”

Another fond memory with my FFA jacket was traveling to Washington D.C. in June 1977, to participate in the Washington Conference Program. Everyone has a turning point, or that “ah-ha” moment in their life and mine occurred during Washington Conference Program. I recall arriving in Alexandria, VA on a warm June afternoon, looking at the five-day schedule and the number of times we were required to be in official dress. I took great pride in following the FFA’s official dress guidelines so that wasn’t the issue. My issue was figuring out how I was going to wear the one pair of black pants and the one white shirt I brought with me for five consecutive days in hot and humid Washington D.C.! Fortunately, I don’t remember how the week went along with the clothing debacle but I’m sure it prepared me for my international travels and the ability to wear the same clothes multiple times even if it does require an extra splash of cologne.

I credit the impact of the Washington Conference Program on my career path in agriculture and education. Those who have participated in the Washington Conference Program or Washington Leadership Conference understand the personal growth trajectory that results from program and the staff. That summer, WCP was staffed by Robb Boyd, Scott McKain, Mike Jackson, Bobby Tucker. All were past state officers, and most were also past national officers. A few years later I participated in FFA’s Work Experience Abroad (WEA) with Robb Boyd. I was in Switzerland and Robb was in France. And yes, my FFA jacket was along for the journey.

Now it was just a small separation when I first noticed and since I never had success repairing a separated zipper, I thought I 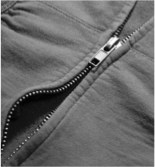 would be extra careful walking so the zipper wouldn’t separate more. I carefully sat down and waited to be called to walk toward the stage – so far so good. Well, with every step I took toward the stage the zipper inched its way farther apart. It was halfway down by the time I reached backstage when I turned the corner and saw it. STAIRS! This was not good. At this moment I realized that with every step up the stairs my pants zipper exponentially separated. When my name was called, I started my trek across the stage by doing a sidestep so my back was to the audience, Fortunately, I received my certificate first and quickly and strategically placed the document over my separated pants zipper and continued my way across the stage. Oddly enough, once off the stage I had no choice but to try to fix my problem that was quickly resolved by zipping it down and up a couple of times – problem solved. That was the final appearance with my FFA jacket as an FFA member.  (I have the slide my FFA advisor took of me and if could scan it I’d share it.) 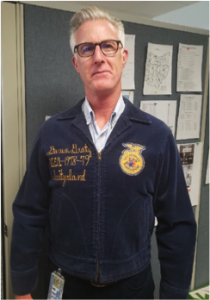 We sold our house this past summer and I was cleaning out one of the closets, my FFA jacket greeted me once again. I took it off the hanger and tried it on and it fit! I took the jacket to the office and presented it to the Ag Ed staff for them to use it they wish, but only after obliging their request to see if it still as fit. Fortunately, I knew it would fit.

In between receiving the American Farmer Degree in 1980 and presenting the staff with my jacket in 2018, a lot of memories have been made with the FFA jacket. Not my jacket, but the jackets students purchased and proudly wore during my seven years as a teacher of agriculture. My 15 years the executive secretary for the Ohio FFA Association afforded me the opportunity to get our FFA officers jackets tailored fit on our visit to Universal Lettering Co. in Van Wert, OH.  I’m sure the 220+ state officers I worked with have a few memories of those trips to Van Wert.

These are just a few of the memories I’ve had with the FFA jacket. I’d love to read some of your memories with your FFA jacket.