Within my host family, I am blessed to have two younger brothers. These two boys are always bright spots in my day. The oldest son, Clement, 12 years old, has many responsibilities around the house. He helps with the cleaning by sweeping off the porch and doing dishes. He also goes to the farm some days with my host dad and helps my host mom out in her store. He is also a very clever young boy; he excels in school and speaks English very well. I find myself relying on him as my translator any time my host dad is away. 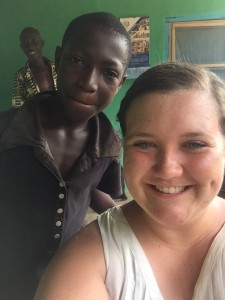 Eugene is 8 and is the baby of the family. He is such a goofball and spends most of his time playing with his young niece, Harret. Like Clement, he is also very clever and excels in school; they even moved him up a grade when this current term started. He loves to ask me questions in English, but typically has to ask Clement what my reply means, because he is just starting to learn English. They both attend Bepoase Methodist Primary School, Clement in class 5 and Eugene in class 1. Just like brothers do in the U.S., Clement and Eugene fight all the time. Being the older brother, Clement likes to torment Eugene, and Eugene likes to annoy Clement.

They take a time out from their brotherly feud in the evenings, to work on homework together. During this time, I typically make it a point to sit on the porch with them, just to observe. I enjoy watching this bonding experience as Clement takes the time to explain things to his little brother, who listens attentively.

Recently, while working on Eugene’s homework, they needed an eraser. Clement, being as clever as he is, knows that the likelihood of me having one in my room is good and asks me to borrow an eraser. I quickly go to my room, and grab two, new mechanical pencils from a pencil bag. When I take them outside and hand them over, they look at them funny. Clement quickly uses the eraser on one of them and hands them back to me. I hand them back and explain that I want them to have them. He still looks at it funny, and that’s when it hit me! These pencils are foreign to them; they’ve never seen a mechanical pencil in their life, much less used one. It never occurred to me that they wouldn’t know what to do with them. After showing them what they did, they were ecstatic to have them! It was like Christmas. I never expected something like a mechanical pencil to be such a luxury item, but it is.

I love that I could introduce them to such a small thing, and brighten their day, just like they do mine.