Monday’s lesson plan for the Agriculture Education class was quite simple. A quick game of Two Truths and One Lie followed by a warm up question, class discussion and group activity. What I thought would be a normal, yet engaging lesson for them quickly became a cultural one for me. As I stood in front of my simple free standing white board, I posed the question: what is the purpose of teach 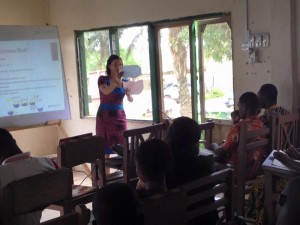 ers? I imagined receiving the usual responses such as: to help prepare young people for life after school, to create critical thinkers, to inspire creativity and entrepreneurship, or to engage students in purposeful work and development. What I got was very different.

After what seemed like several minutes of awkward silence I received one response from a charismatic, big-toothed young man named Obet (oh bet). He said “to teach students knowledge about a particular subject”. Several others mumbled and nodded in agreement. I was surprised at the simplicity of his response. It seemed that their minds had made no connection between the word ‘teacher’ and words like ‘mentor’ ‘inspire’ ‘caring’ or ‘compassionate’. I probed further and asked, “by the end of a student’s schooling, what should they be able to do?” and “what characteristics do people need to have in order to be successful in life?” This time, the responses flooded in. I quickly wrote their words on the board with my prized black whiteboard pen. Words like “organized” “punctual” “respectful” “hard worker” “team player” and “kind” exclaimed from my small class of nine.

It struck me as odd that they hadn’t connected these life skills with the role of the teacher. I continued to ask “are these qualities and the role of a teacher not intertwined?” and, “what if a teacher could impart knowledge as well as teach students about critical thinking, kindness, punctuality and respect?” I let the questions hang in the air until one by one I saw the proverbial lights bulbs flick on. It wasn’t until this moment that they associated teachers with role models, mentors, and givers of life lessons. I felt sad for them… Sad that they had probably never had that one special teacher. They hadn’t had that science teacher who told them they were brilliant. They hadn’t had that sweet fifth grade teacher who taught them that love and forgiveness are the best qualities one could ever possess. They hadn’t had that rigorous English teacher who made them write and re-write a paper until it was the best they could produce. They hadn’t had that teacher who told them that with hard work, anything was possible. Why? Because all they’ve ever known is an all knowing, all powerful figure, who stands in front of the classroom and talks. They had only ever known lecture their whole educational life…What a waste…

While these thoughts raced through my head, the small class was now alert and leaning forward, ready for the their next task. It was as if they were now awake, knowing why learning lesson design, classroom management, engaging moments, and icebreakers actually had a purpose after all. They were ready for the activity. I fed off of their new energy as I presented the challenge of the day: “When I say ‘go’ you will have exactly thirty minutes to create a lesson plan on any agricultural topic. You must have the students get out of their seats at least once and you must include one game. You may not use lecture and can only plan to do ten minutes of talking maximum. You also must be creative with your review activity and cannot simply ask questions. You will work in groups of four and present your ideas when the time is up. What questions are there?” I let the assignment linger a moment before saying “go!”. They excitedly hopped out of their seats to organize themselves. I opened my laptop to play my classic rock playlist while they worked. It appeared that music during class was also a new concept.
Soon I realized that if I had assigned this task to American Ag Ed students or even my fellow AgriCorps members, they would have brainstormed dynamic and creative activities that included songs, puzzles, and engaging review games. For my nine Ghanaians, this proved to be difficult. They struggled to think of anything beyond lecture, beyond the techniques I had used in the previous week’s. Why? Because until this semester, they had never experienced experiential learning. They had never been expected to be creative, to design, to invent, to try. There was no framework to go from. I didn’t give up. . . I hovered back and forth between the two small groups. I asked questions, pushed them to think, and wouldn’t allow them to quit. I checked my watch, the wrist beneath it wet with perspiration. Time was up. As the two groups shyly presented their lesson plans, unsure about their ideas, I felt proud. I listened attentively as they spoke of games, matching activities, small group work, trips outside the classroom, and puzzles. They had done it. They had managed to design a lesson that could result in real learning, yet lacked lecture. It may not have been perfect, there definitely room for growth. Yet, it was a start.