Writing about gender is hard. Growing up, I was exposed to successful females of almost every occupation. Very few people ever told me “You can’t do that because you’re a girl.” If someone did say those things, I usually just did it anyway. I was allowed to develop my own sense of empowerment and independence. Gender equality is still a struggle in the U.S., but it has come a long way.

At my friend Asana’s wedding a few weeks ago, we were sitting around chatting and helping with a few random duties while she was getting her feet dyed (a typical practice for Muslim weddings here). Women were cooking in the compound, laughing, socializing, and working together for a common purpose. A small boy was playing with Asana’s phone and got some of the herbal dye on it. Instead of wiping it off himself, he started throwing a fit until a slightly older female cousin of his grabbed it from him and fixed the problem, wiping off the dye and unlocking the phone so he could play with it again. I laughed and said that Ghana would not survive without its women. Asana giggled and said, “No way! Women hold everything together.” 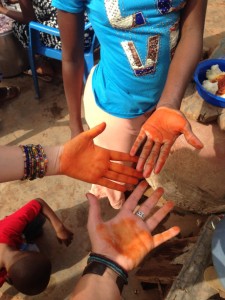 Gender equality is a big “issue” here. Ask any NGO/Do-gooder organization and they will tell you that women are under-valued and do not have equal rights in this society, which is very correct. However, women are still very powerful in their roles here. In the North, women cook, clean, take care of the children. Additionally, women grow crops that they sell to pay their children’s school fees, buy school uniforms, and take care of most day-to-day activities with. Men grow crops like maize, cassava, yam, etc. that are stored up for food. While there is some overlap, those are generally the traditionally defined roles. Husbands and wives often handle their money separately, especially in the North but share with the other when one runs out.

A group of academics from the University of Wisconsin with some pretty stellar world traveling and development experience came to Ghana to work on a curriculum development project. I was fortunate enough to get to travel around with them a bit. Two particular experience are relevant to my ramblings here.

The first: We are sitting and chatting with a bread baker named Koomson who is quite an interesting and educated person. He speaks more than 5 languages fluently, among them French, Spanish, and Italian. Koomson is pastor at a church in Tamale and hold a master’s in theology and literature. He’s studied in several countries. He also makes some pretty amazing bread. The group is talking about their project and the gender equality component. Koomson laughs and says, “It’s not equality, it’s equity. You can’t pick up that rock, but I can.” In reply, a female member of the group says, “Yes, but I can carry a child” and makes a circle on her belly representative of a baby bump. 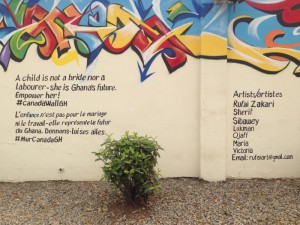 Immediately, I’m annoyed. At this point in my life I would pick up all the rocks in Ghana before ever thinking about growing a human…. However… Upon further reflection, there is some merit to his comment and her reaction…. Feminists, hold on, it’s not that simple…

The Second: They held a meeting with a women’s group in a very rural village. Questions like “What makes you happy?” and “How do you define success?” were asked. Answers like “Peace” and “My children can go to school and are not hungry” were mentioned. The discussion furthered to how they accomplish those things. Many of them described the activities that I listed above as the “roles” of women.

An essay by a Ghanaian man named Eric Kwasi Bottah Oyokoba called “Gender Inequality and Development Paralysis in Ghana… and Africa,” gives us another glimpse in to womens’ struggles here: “There is a Ghanaian adage out there that says: If you educate a man, you educate an individual, but when you educate a woman, you educate a whole nation. How so true but also how so tragic we have not adhered to this revelation and has often rendered our women to the bottom half of the totem pole. In every African country out there, women outnumber men in the population but they are abysmally under represented at the commanding heights of the economy and power.” (Full article and greater insight in to gender roles in Ghana, here.)

I used to think that women in Ghana were complacent, but still very powerful in their roles. I used to think that Ghana wasn’t ready for feminism… But maybe feminism just looks different here right now. I know women who are doctors, teachers, nurses, artists, musicians, and scientists (all typical male roles in this country). My friend Esther just started school at University of Cape Coast last fall. She is studying physics and engineering (and killing it I might add). Asana is working on her master’s. I have met a food scientist and nutritionist named Flora who works with SARI (Savannah Agricultural Research Institute) to improve ways high nutrient vegetables and crops are stored and used in local diets. I have met women who are painters and weavers and master craftswomen. But I have also experienced the opposite… Girls who are not allowed to go to school, girls given away as young brides, girls sent to the city to make money who are then forced in to prostitution… 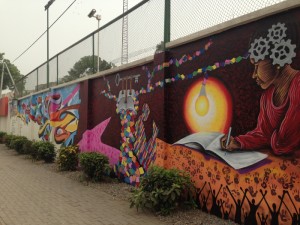 Women in Ghana are not complacent. They are powerful. That small girl is a fantastic representation of women in Ghana. They get stuff done. Women see a problem and they find a solution. Men would sit around and argue about it for an hour (or throw a fit, like the small boy) and still nothing would be done. Women are changing the way Ghana works. They are responsible for many of Ghana’s successes, however unrecognized they may be. They are challenging their roles. They hold the country together.

Being a woman in agriculture is hard, no matter where you are in the world. Men have tried to define our roles for centuries. The only way we have been able to break out of those definitions is coming together, recognizing and celebrating our accomplishments, making those accomplishment visible to more than just ourselves, and building our equity until we gain equality, until we demand equality.

Melissa Tabke received a bachelor’s degree in Animal Science and a masters in Ruminant Nutrition from Texas Tech University. This is Melissa’s second year as an AgriCorps Member in Ghana and she previously served as an agricultural intern in Panama.