If you’re from a small town, you know what it’s like when something BIG happens in your community. I remember when I was in 6th grade and the Pendleton County boys’ basketball team won Regionals and went to state. The whole town was celebrating! There was a parade, a coloring book made with pictures of the players, and I waited in line for an hour to get my Regional Basketball Championship shirt signed by the whole basketball team. No matter if you are in the United States or in Ghana, no one can replace that feeling of pride when there is a victory in your hometown. 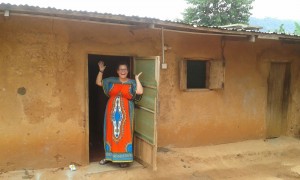 Recently, Korm has had TWO great victories! The first hometown success was when Korm M/A JHS won the Regional Farmers Day Award!! This is an award that our school worked exceptionally hard to receive. Our 4-H Club cleared the land and planted one acre of black eyed peas, two acres of maize, entered all our work in a record book, created experiment gardens, and decorated our gardens with hand-made signs. The district Ministry of Food and Agriculture agent visited our school to inspect our gardens and asked our students questions about our projects. In the beginning of December, our school was selected as one of the top 5 schools in the Eastern Region. After winning, our school traveled to Koforidua, the regional capital, to receive our award. Our school was given brand new farm tools to keep growing our success. We were given a wheel barrel, two pairs of rubber boots, a backpack spray machine, four new cutlasses, a shovel, two hand shovels, and two watering cans. The 4-H officers and a few community members traveled to accept the reward and the 4-H Officers were on cloud nine! They could not stop smiling! I was so proud of our 4-H club and the work that they put in.

A second, and most recent triumph in Korm was at the Oterkpolu area sports week that was help the end of January. After months of training, our school and seven other schools spent three days at Oterkpolu Presbyterian School playing football, netball, volleyball, and track. Augustina, a form one student, ran her little heart out to be declared the female winner in the 200 Meter Race. She won be a landslide too!! I was so proud of her! Our winnings didn’t stop there. On day two, the boy’s JHS football team had an amazing win sending us to the semi-final game. We won 1-0, thanks to a form two student, John who made a goal off a penalty kick, from behind the half field line! IT WAS AMAZING. During the semi-final game, we again won 1-0 off another penalty kick. This sent us to championship game. This is when my nerves started kicking in! Our boys had played four games in the last two days, I was nervous they would be too tired, but the outcome of the championship game shocked us all. 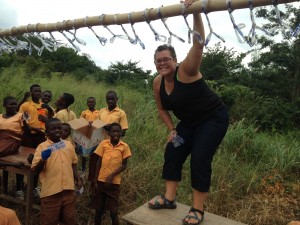 The time in championship game ran out and the score was 0-0, sending us into penalty shots. I was standing on the field giving as much sideline encouragement as I could. Everyone was nervous, but I had a lot of faith in our goal keeper, Agbertey Joseph. Five of our best players took their penalty shots, but we were still tied 3-3, moving us into EXTRA penalties. All the boys that already went couldn’t shot again and out other players were having a lot of anxiety about who would go next. The opposing team attempted first and Agbertey blocked the shot. The team was on edge; all our hopes relied on a small, but mighty form one boy named Nicholas. The crowd and teams were all silent, I was squeezing the hand of Patricia, a fellow teacher, eagerly awaiting to see the results of the kick and ultimately the game. Nicholas went for the kick and sent the ball into the top right corner winning us the game. AND THE CROWD GOES WILD!!! You have never seen excitement until you have witnessed Ghanaians celebrating a sports win! Players were running all over the field screaming, jumping, and hugging. The students was chanting and singing until it we made it back to Korm; the whole car ride home, we were singing out the windows making sure all the people we passed knew we were celebrating. I was so proud of my school and my students!! I guess this is what it’s like to be a soccer mom…..

Because of all these victories over the last three months, Korm School has put ourselves on the map. We now have the opportunity to be nominated for the National Farmers Day Award and at the end of February our sport champions will travel to the zonal sporting games where we will (hopefully) be just as successful! As an innocuous school on the mountain, Korm M/A School has definitely made a name for ourselves in the District and Region and has given myself and the students experiences that we will never forget.

Kelsey Knight is a Community and Leadership Development graduate from the University of Kentucky. Before becoming an AgriCorps Member, Kelsey raised sheep and spent a semester learning about international extension in Serbia.