When I step into St. Peter’s Catholic Church every Sunday, I am ready for the Celebration! The drums, dancing, and singing help make for a very loud, lively, and long Mass. That is why I knew my fellow parishioners would take the celebration to a-whole-nother level at Easter. They did not disappoint.

The Easter celebration started on Saturday at 8 pm standing around a scorching hot fire on a typical 90°F evening to light the Easter candle to begin the Easter Vigil Mass. Then, with everyone’s candles lit, we processed into the church and began the first of the seven Easter Vigil Readings. The first was read in English, followed by the reading in Dagbani. I was used to Dagbani, the native language in Northern Region, Ghana, being read during Sunday Mass, but was less than thrilled that seven readings just became 14! Luckily, the parishioners that spoke only Dagbani were taken outside to hear the remaining readings. Whew.

The evening was extra special for 19 people in attendance. They were baptized! Those that were baptized were students from primary, junior high, and six from my senior high school, ranging in age from approximately 10 to 20 years old. Their smiles and excitement throughout the Mass were as bright as 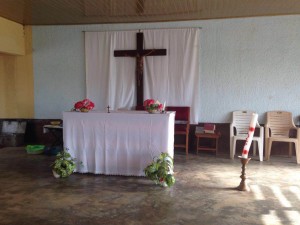 their white dresses and shirts. This was especially the case for Ndognan Jerry, an Agriculture student and 4-H student of mine. The Godparents and fellow parishioners didn’t fail to wear their absolute best to the occasion either. The drums, singing, and dancing played extra loud and long to celebrate the 19 newest members entering into the church and I think to make up for the extended quiet time spent listening to the 7 readings. For me, the Mass and the night finished ten minutes before midnight. However, I’m sure the singing and dancing lasted through the night for most.

Easter Sunday at Pong-Tamale was kicked off with Mass at St. Peters or service at any one of the five other Christian churches in my community. Afterwards, the feasting began. In my household, three pigeons were killed, cooked in a peanut oil soup, and served on rice. It was not the same as ham and meatballs with potatoes, vegetables, all the other fixings, and dessert, but it was special and I was able to enjoy the meal with the father of my house and his three boys, my brothers. My brothers blasted Ghanaian rap music for the rest of the day and showed off some of their dance moves. 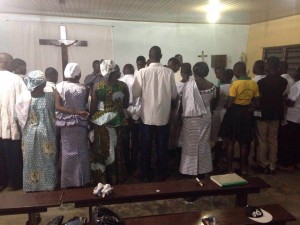 It wasn’t until Easter Monday that I had to show off my own dance moves. In a region where the vast majority of people are Muslim, many northerners, Christian and Muslim, spend the government Holiday at a city picnic singing, dancing, and feasting. I spent Easter Monday at a picnic with my parish and the neighboring parish at the Savelugu School for the Deaf. The morning again started with Mass. Then, the ladies in the parish came with coolers filled with rice and served me and Gene, a Peace Corps Volunteer, a meal of rice with meat, maybe goat, and a cold sprite in a glass bottle. After the feast, the drummer from Mass got on the mic and started DJing and hyping the dance competition. A primary student from the school for the deaf was the crowd favorite and boy could he shimmy! After being called out to dance myself, I took the dirt floor outside the school building with Mary, a member of the church choir, and managed to mix a few country swing moves in with the Ghanaian Rap.

Although the speakers were packed away for the day and everyone left for home, the celebration still goes on and the joy remains. Last Sunday after Mass, the young girl (approximately 13 years old) that told the DJ to call me up to dance at the Easter Monday celebration came up to me and said, “good morning Matthew” and then out of nowhere, reached out and gave me a big hug. That made my day. Easter 2016 is one I will never forget. Happy Easter!