It was an early morning, around 4:30 a.m. and the students were lined up waiting to get started. It was a rare chilly morning so most of the students were wrapped up in long sleeves or coats. Sports week was approaching us so for two weeks prior, the school was training and getting into shape for the event. In the mornings before school, the students would go for about an hour-long jog and then would go to the school to start practicing for the sports they would play at the competition. The games consisted of soccer, volleyball, track and field running such as running 100 m, 200 m, and 400 m. The girls also played netball. We would train until about 9 a.m. and then the students would go home, bathe, and then come back for school. Later that evening they would practice more before night. Sports week is taken very serious because each school is representing their community. The level of competition is very high and every school wants to be first. 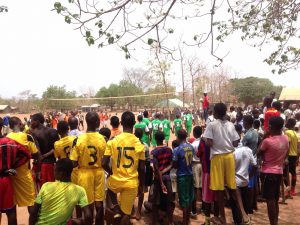 Growing up playing sports my whole life, I was thrilled when I learned about sports week for the schools. I was excited to see how they would perform and how athletics here would compare to athletics in the U.S. The most popular sport here is soccer and everyday you’ll see kids of all ages playing. Many will build makeshift goals out of anything near their homes so they can play with each other. Never playing soccer growing up back home, I had to learn the rules and how to play the game from the kids in the community. Occasionally on weekends you could catch a game playing on TV with teams from the European professional league. It’s a big event when games come on so many of the teachers will gather together to watch the game. I enjoy seeing how excited they get for the game much like I do for a big football or basketball game. 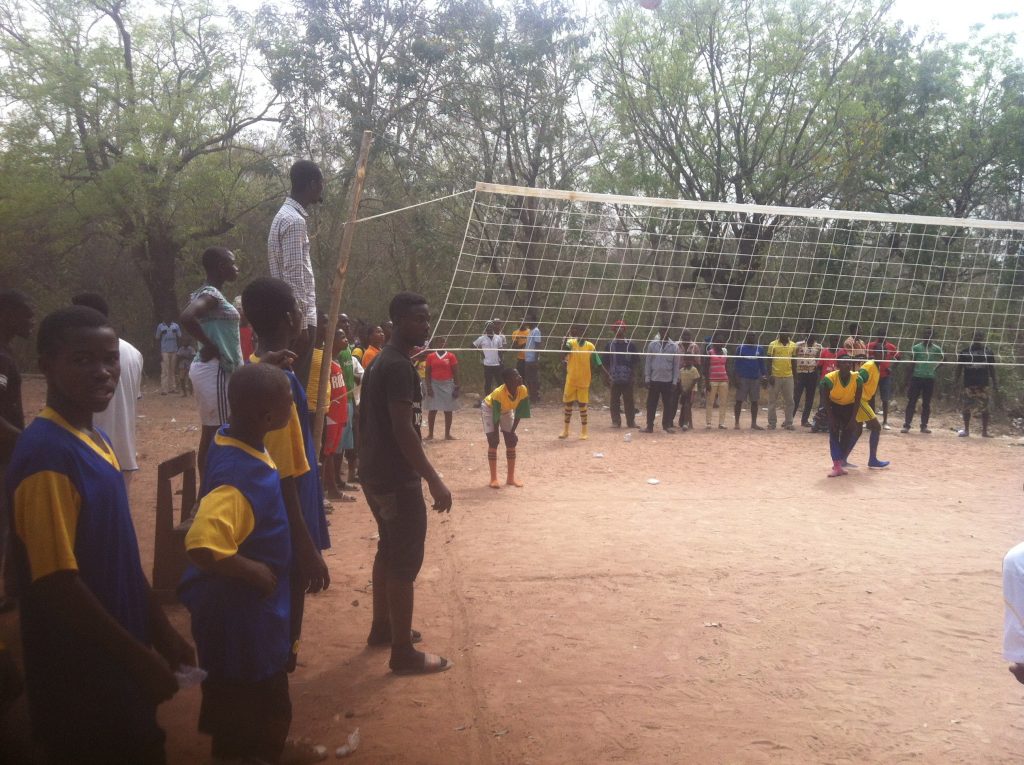 At the beginning of the school year, a date and a location was set for the sports week. This year the selected site was Bebuso JHS; a school located about five miles away. Because travel is difficult and expensive, the students and a few of the teachers would stay at the site throughout the week instead of traveling back and forth. They left Sunday evening and the games started that Monday and finished on Friday. Because the students would be gone for the whole week, they prepared for the trip by bringing foodstuffs to school each day two weeks prior to the event so they could prepare meals everyday. They brought yam, corn grain that they would use to make banku, stuffs to make stew and porridge for the mornings.

For junior high schools there are several different rounds of sports events. The first round that took place in Bebuso is called the circuit games. Neighboring schools compete against each other in these events. In our circuit our school competed against four other junior high schools. After the circuit games, the winners or the top students would be selected to form a team to go and represent our area at the district games. The district games would consist of five different circuits coming together to play. After the divisional games there are zonal games then regional games and the sports would conclude with national games featuring the top athletes throughout the country competing against each other. Many of these students are recruited by senior high schools to come to their schools and because there is a few to attend SHS they could even get their tuition paid for. 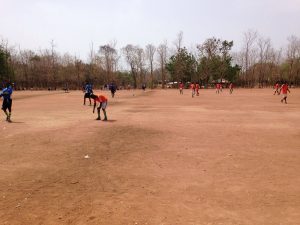 Monday morning prior to the games starting, the students were excited and ready to go. This was their chance to earn bragging rights for their school. Farmers from each of the villages skipped out on going to the farm to weed for the week and many of the other community members came to cheer on the students. Music was blaring and the primary kids were dancing around and having a good time. At the end of the week, Samanyhia had plenty to brag about. The boys won first place in soccer, a boy from form 2 named Richard that I’m positive can run for miles without getting tired won the 400 meter event, Happy from form 2 won the 200 meter, Winifred from form 3 won the 100 meter and Elijah from form 2 placed second in the 100 meter. (Form 1, 2, and 3 for JHS here is like grades 6th, 7th, and 8th for junior high schools in the US). They were selected to go and represent the circuit along with three other girls from form three because of how well they preformed in volleyball and netball. A couple weeks later I went for a day to cheer on our students at the district games. The competition there was strong and they didn’t qualify to go on to the zonal games. Even though they didn’t win I was proud of the way our students played and the sportsmanship that they displayed. The sports week was a great break for the students to go and have some fun and I was proud to be apart of it and had a lot of fun myself.