Walking through a very “bushy” school farm today I see something that looks very familiar, th 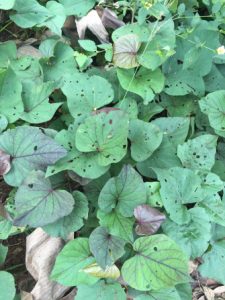 e purple and green leaves of a sweet potato vine!!! Us North Carolinians pride ourselves on this “dirt candy” and love to eat our top commodity in a variety of ways. However, unlike North Carolina, these sweet potatoes had somewhat of a canopy. The potatoes were planted under a plantain plantation. To add to the already green and growing vegetation, there were cocoa tree seedlings planted variously throughout the sweet potatoes in the plantation. I do not think I have ever seen so many crops being grown in such a small space! In addition to the plantains, sweet potatoes, and cocoa tree seedlings there were also pawpaw (papaya) trees on the outer edges of the farm. I was thrilled to find so much agriculture growing at my new school! While walking with Nelson, the 4-H advisor and teacher I will be working with this year, it was exciting to find out that all students at the school are a part of 4-H club here at Obooho Junior High School.

Here in Obooho, students fetch the teachers water from the borehole (well) and bring it to our bunglaow. To store our water when it’s brought in or collected from rain we use large containers that look like trashcans. My large green container for storing water was full of things bought from the market/school supplies among other things from the move, not water. After lunch I was hanging my new mirror up when I noticed a trail of tiny creatures lining the wall……ANTS. Barely able to see them I shine the light to follow the trail and see them going into my large green container with all my belongings! I went and got Nelson who brought a can labeled “insecticide” and he ever so graciously sprayed them dead for me and helped me start cleaning ALL the items in the bucket. As soon as we get the majority of it all out and cleaned off the downpour begins and we rush everything inside and dump it on the floor.

My new friend Mary who lives next to me in the teacher bungalow (we have our own rooms, but share a kitchen and bathing area) is sadly leaving on Monday to go teach at another school. But, in less than 24 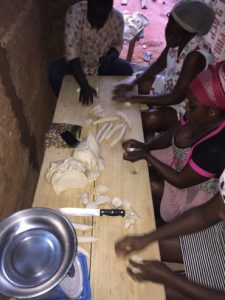 hours she has become such a sweet friend to me. Mary is also an entrepreneur and she bakes bread to sell in town. Tonight I watched and even got to help! She makes tea bread and sugar bread. Okay first of all, let me just say the bread in Ghana is AMAZING. I think because it’s all freshly baked. After kneading and rolling out the dough, I tossed it in flour. Edna, Mary’s student, placed the pieces of flour-covered dough onto tables for it to rise. It was fascinating to watch Mary, her sister (also named Mary), her friend Fred, and Edna’s parents all help knead, flour, and place the dough to rise. Not only was this a family and friend ordeal, but Mary bakes and sells bread each week. Not only does she sell bread, she teaches. Not only does she teach and sell bread, she has two large gardens around our house. Like I stated earlier, she’s an entrepreneur and a visionary. It was amazing to be sitting in a house made of mud and watch someone so young have her own business and not be afraid to put in some trust to risk it for the biscuit, I mean bread. 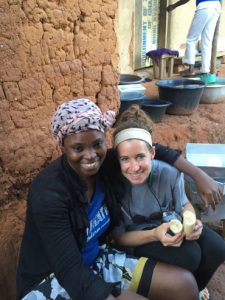 rom making bread I found my water filter to be leaking all over my bedroom floor. So, Mary and I moved the items around the water out and mopped it up. She then lent me her large table to put in my room since she’s leaving. The girl is full of kind gestures! When I saw that water though, it felt like one thing after another today, but all I could do was laugh because I couldn’t control the situations. Making bread was literally awesome though. Mary inspires me in more ways than one.

Agriculture has so many opportunities here and it’s so exciting to be a part of it all as well as igniting the fire in young ones to get excited about planting a seed in the ground the Good Lord gave us and watching it grow!