So imagine just for a moment with me. Ok…one two, three. It’s probably 80 something degrees outside and feels like 90. You’re using your iPhone to create a blog post in the front seat of a transport vehicle otherwise known as the tro -tro. The air is thick with the smell of everything from local foodstuff like the hole less donut known as bourfouts to beans, rice, and even dried fish. The air is also dry from dust and the smoke from vendors’ food which adds to the ambiance of my cushioned front seat. The tro-tro station loudspeaker is simultaneously blasting something in the Twi language about a destination, most of which I can barely make out. Yet, in what may seem like chaos allowed me the peace of mind to publicly reflect on the last few months of my experience as an AgriCorps fellow living in the Eastern Region of Ghana West Africa.

A few days ago, I participated in the infamous No-Till training at the Center for No-Till in the large city of 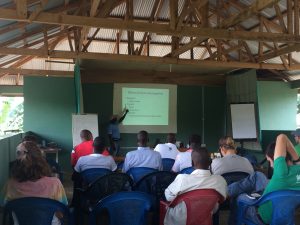 Kumasi hosted by Dr. Boa, an expert in conservation agriculture. The training required that I bring a member of my village Nkankama to help them understand the benefit of using compost and cover crops to maintain soil nutrients with minimum tillage. Constantly tilling the soil will leach valuable nutrients and using chemicals to control pest and weeds (often times inappropriately), can be more damaging than helpful to both people and their crops. Instead, Sir Dan, my 4-H co-advisor, and I learned that using cover crops not only helps improve the soil quality, but also will out compete those annoying weeds we’ve been fighting using our machetes at the school farm. In addition, we can plant specific cover crops that do well with other plants like maize or hot pepper and that are much easier to manage due their vine like nature and short growing cycle.

There are cover crops for a diverse number of situations for both dry and more tropical climate and help restore life over time to some of the worst soils. Since we won’t have to till the soil, we leave the chopped weeds as natural compost that becomes fertilizer for the soil. We then plant cover crops in their place and allow them to cover the weeds, stunting their growth. We can even intercrop major crops with cover crops given we plant during a later stage of its growth. 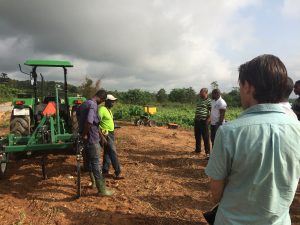 The No- Till Philosophy is that less is more. The method requires less time and energy to achieve optimal results for a farm operation. The idea is to use the environment in a way that leaves it in its most natural state similar to furrowed areas like forests. This allows nutrients to become recycled extending the life of the soil. Of course No-Till is not a perfect method and not many things are. Chemicals may have to be used for pest and weeds as a last well calculated effort, but teaching principles of crop rotation to students and farmers at my village will help to significantly reduce the need for such things like burning the land or over using chemicals.

While the sweat continues to drip down my face and I am periodically bombarded by street vendors selling an assortment of imported and local goods- from toothpaste to portable phone chargers. My cargo of 3 chickens and a bag of mushrooms inoculants will be great additions to the school garden that Sir Dan and I have been helping the 4-H club to build. Thanks to the things we learned from Dr. Boa and the Center for No-Till we can start a small revolution for village farming through the youth and improve the way these rural farmers approach their craft. In time maybe more of my students will decide they can be both doctors, policemen, or business people and farmers at the same time. Africa’s agriculture industry potential is extremely high, but more needs to be done to reach those who may not have access to knowledge that literally sleeps at the fingertips of the people from more developed nations. The work that I do here is not for those looking for a few social media pictures with cute kids. It’s more for those with 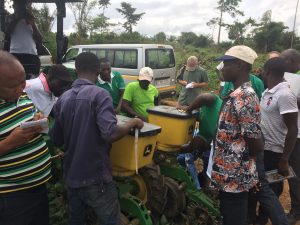 passion and a willingness to sink their ships like Julius Caesar and remind their soldiers that there is no turning back (not literally people! We’re talking metaphorically here.), foregoing convenience and comfort for something more fulfilling. Those somethings happen to include being a teacher, farmer, mentor, nutritionist, personal development coach, explorer, and a student all at the same time. When I wake up in the morning and think “why am I here and what am I doing in Africa again?” I remind myself it’s because of those reasons. I get a chance to do that for someone other than myself and that’s powerful.