I’m a big fan of Humans of New York. Stories are incredible things. Brandon Stanton is one of those people who can create deep human connection with complete strangers. His ability to dig down to that structural piece of humanity that we try to bury so deep within ourselves is amazing. Sharing that is so freeing. Can I do that, too?

I was standing in the middle of a rice field with a researcher,  lets call her Esther, at CARI (Central Agriculture Research Institute). She was sharing information about the research she and others were carrying out there. This woman was so full of knowledge that only comes through intense experience. I was inspired by her, such a strong woman. Naturally, I wanted to know why and how she had become so passionate about agriculture.

“I never wanted to do agriculture. The story of how I became interested… it brings me to tears to think about it. I did not always like it, but I have come to appreciate it. I don’t like talking about it.”

So honestly, she continues, “I lost both my parents during the war. I was young. Poverty makes people do 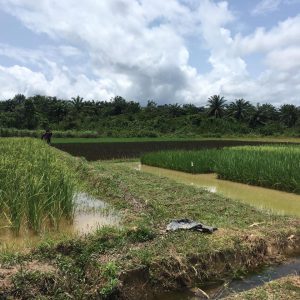 difficult things. There was a man, nearly 30 years older than me. He said I had to have his child, but then he would send me to school. I knew if I wanted an education, I had to do this. So I got pregnant. He told me I should do agriculture. I worked on a farm, I planted rice and other things, worked harder than almost anyone else. In university, I became president of the student body, the first female president, and was also working almost full time on the school farm. The head of the agricultural department noticed me. Some friends said I was taking on too much and that I should go for a break here at CARI. When the head of the department saw me working out in the fields with all the laborers, he was so impressed. He offered me a position, but at this time I was still going to school and managing the university farm. So, I split my time between CARI and university until it became too much. When I finished school, I decided to come here permanently. I have my master’s degree. I’m carrying out research on 152 different varieties of rice in varying climates.”

“That man is dead now, the one who forced me to do agriculture. It was hard, but I have come to appreciate agriculture. My daughter is here with me. My job is important.”

What if we asked questions intentionally? When we ask someone “How is your day?” we really want to hear the answer? What we if shared, honestly? It takes an insane kind of courage to do that, both asking and answering. One that Esther has. One that I want to have. I’m trying to learn, trying to find that selfless part of me. It’s hard. I’m a very selfish person. I get buried in that deep, dark hole a lot. (Look! I’ve made this whole paragraph about me!) But I’m working on digging myself out, and doing that means investing in other people’s stories. Listening, intentionally.