To anyone looking on, the day had been a series of utter failures….one hit after the other…the FFA meeting had only 2 members show up, the FFA movie night had to be cancelled, and the FFA officer induction ceremony (which I was really looking forward to) scheduled for the next day was forced to be reschedule at the last minute. Watching the disappointment spread across the faces of my few committed FFA officers as I tell them the news yet again of another cancellation was HARD, very hard. But this experience was nothing new, I’ve had this scenario happen many a time here in Liberia…it’s probably why I haven’t had the energy to write anything or blog anything for these past couple months (sorry!). I’ve spent many hours chasing down administrators in order to get approval for a little thing like hosting a small pick-up soccer game, I’ve written countless “letters” asking for things that in my own culture I would have just been able to ask for verbally, I’ve wasted entire days looking for a functioning printer within a 2 mile radius, I’ve watched my well-thought out and beautifully-planned lessons fall to pieces as soon as I try and explain directions to my group of 45 sophomore students, and I’ve sat through so many mindless meetings only to emerge feeling just as confused as I was when I went in there because I still can’t understand all the little nuances of the enigma that is the “Liberian English” language (let alone the number of social cues that I may have also missed). Soooo many days I go to bed feeling stressed, anxious, defeated, and perplexed wondering “Am I good ENOUGH for this? Did I do ENOUGH today? Try hard ENOUGH? Get ENOUGH people to attend meetings? Complete ENOUGH work? Make ENOUGH change?” or “what on earth did I do today? Am I wasting my time?” and “did I even make any difference today?”

Suffice to say, it was an exhausting day, both physically and emotionally and yet something felt different when I fell into bed that night, I felt a sense of peace and a sense of hope wash over me. Why? What was different about that day than all the other days? Why didn’t I close my eyes and worry and fret all over again about the future of the FFA club in Liberia?

The difference between this time and all the other times? It was the first meeting and first big event that our newly elected FFA officers were given full responsibility to plan. They were responsible this time for getting permission from the appropriate authorities, for reserving the room, for creating the agenda, and for advertising the meeting and making sure that people showed up. To the onlooker, they failed. Only 2 people came. But here’s what you didn’t see….

Then came the failed movie night….again nobody came. But what you didn’t see was this….

Then came the induction ceremony which had to be postponed due to an irritatingly small technicality (3/4 of the administration offices were informed of the event but we failed to inform the 4th office via letter a minimum of 3 days in advance and so were threatened with FFA being shut down if we proceeded to have the program as scheduled….what in the world?!? I digress…). But what you didn’t see was this…. 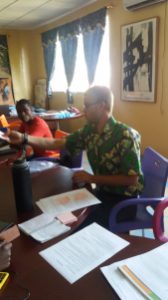 Don’t get me wrong, I felt disappointed, sad, defeated, and steaming mad (especially when I found out about the induction ceremony) but I still couldn’t wipe the smile off my face that day because more than the failures of that day, I saw success. I saw students stepping into these new leadership roles and stepping up to the plate. I saw leaders putting all they had into their work, refusing to give up. I saw leaders struggle through the difficulty of the early growing pains that all leaders must go through. I saw creativity bubbling out of them, daring to be bottled back up. I saw responsibility guiding their actions as they steadily discussed ideas and delegated roles to each other. And, I saw in them their determination to succeed, their determination to see the FFA succeed and their determination to see Liberia succeed.

As I sat back and watched them discuss ideas for how to make things better next time, I realized how self-absorbed and arrogant my thinking had been. I was worrying and fretting and asking “Am I enough? Is my work enough?” when the question I should have been asking was “Are they enough? Do I trust them?”

Reminder to self: I am not the one who is going to change Liberia or change the FFA.

And again: I am not the one who is going to change Liberia or change the FFA.

I am only here for a year and I am still and will always be a stranger in this land. They are where the REAL change is going to come from. So instead of wasting time beating myself up every night after days of seemingly endless failures, I need to remind myself over and over again that I am not some sort of “hero,” I don’t have all the answers, I’m going to make mistakes, and my way is not the only way and instead keep building up and encouraging all the heroes around me, listening to their ideas, asking for their opinions, and encouraging them to try new things. Forget about “am I enough?” and focus on are they enough? Are they strong enough to handle disappointment? Do they have enough discipline for this? Are they creative enough? Are they leaders enough? Are they motivated enough? Are they, as youth, smart enough? The answer….the answer is obvious.

They were already enough, before I even set foot in this country, and they will continue to be ENOUGH 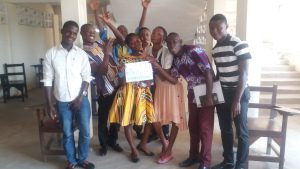 after I leave. My job is not to convince myself (or you my reader) that I am ENOUGH but to show them that they are ENOUGH and maybe along the way give them some technical skills and trainings that will help them become all that they want to be, connect them with local people who will help make their visions come true, stand by their side as they walk through failures, and smile with them as they meet with success as I know they will. This is the only way that REAL CHANGE can occur.

“Founding itself upon love, humility, and faith, dialogue [necessary for real change] becomes a horizontal relationship of which mutual trust between the dialougers is the logical consequence”                              -Paulo Freire in The Pedagogy of the Oppressed