The student advisor turns and asks, “Madam President, why are you so stationed under the flag of Ghana?” At this question Regina, an 8th grade 4-H member begins to beam in her school issued yellow and blue dress uniform and brings her hands up to her chest as she begins her part of the 4-H opening ceremonies,

“The Flag embodies national pride for Mother Ghana, so I am proud to serve as a local representative of the 4-H, an organization that spans the nation. I am committed to serving my club and encouraging my brothers and sisters to become leaders.” She pauses and looks across her officer team then boldly looks back at me as her strong and independent eyes lock onto mine and acclaims, “We, the 4-H will uphold the honor of our nation by seeking to develop as active citizens with life skills and honest character. We are the future of Ghana!”

A sense of awe and inspiration ran though my spine as I got goosebumps at the pride I could hear behind each word. She turned and looked to her right as she said, “Mr. Vice President, thank you for calling the role of officers and assuring that they are at their stations.” 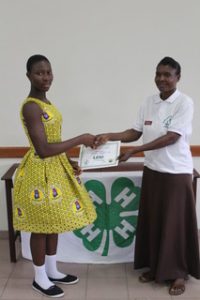 As I stood there and listened to the 4-H members I had been working with to memorize the opening ceremonies I was filled with pride and joy myself thinking back to my FFA days and reciting my parts of opening ceremonies. I still remember the first time as an officer being so nervous to present my opening lines, afraid that I would stumble or forget some of my them and be the laughing stock of the officer team. I could relate so much with these 4-H officers who were presenting at the Eastern Region 4-H Leadership, Education, Agriculture, and Development, or LEAD contest, hoping to win a spot to attend the first ever National LEAD contest coming up in just a few weeks. As one of my major projects for the year, starting the LEAD contests across the country was no easy task, but with 4-H Ghana taking on the project and with the help of my awesome AgriCorps teammates we were now holding the last regional contest before the National one. I had personally spent countless hours working with the school that was now presenting to help them prepare for the contest. They did so well and I was so proud! After all eight teams had presented their Club Meeting, I helped calculate the scores, and was so excited to have a winner! It was time to announce the awards and my students were so nervous! We got down to the final two and you could see them all huddled together and waiting to hear the results, the results I already knew. In this split second I though back to how many times I had been in this same position, waiting to hear the results hoping my team or I would be named number one in the contest. The nerves, the desire, the anxiety all mounting within, my students had poured their heart into this contest, just like I always did. I knew what I had to do. The announcer shouted out, “In second place, Wesley Methodist JHS!” I ran to my kids with a smile and gave them all high fives and fist bumps telling them well done and how proud of them I was. I knew that this moment would either be seen as devastating defeat or motivation to do better next time, and it was up to me to make sure this second place team experienced the later. The split second of sadness soon became smiles and jumps as I celebrated with them and reminded them of the skills they had acquired. 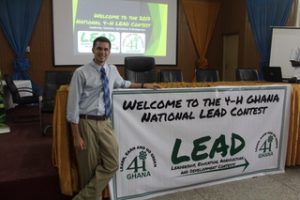 There are many moments in life where a split second is the difference between an attitude of growth or one of despair. How often are we the catalyst of those moments? As a teacher I’ve often seen student’s spirits crushed by parents who tell them everything they could have done better during a game and neglect the great three point shot they made or goal they stopped. How often do we just say good job, or better luck next time with no real thought? It’s important to show our students and friends that we genuinely care and desire to encourage them in both good times and bad. Next time you want to chew out a ref, teacher, or even your own best friend, think about that split second of change you hold in your hand, one of positive growth or devastating despair. While I wished my second place students could have been at the national contest, this loss still became an important lesson of growth. I firmly believe that while you may lose in the moment, you can still win in life, but that is totally up to your attitude.

4-H truly makes some amazing changes in students lives. Positive Youth Development is a powerful tool in the development toolbox. I know Wesley Methodist will come back next year even better than before and they will continue to learn great public speaking and communication skills along the way, because my 4-H members ARE THE FUTURE OF GHANA!

Clayton Carley received bachelor’s degrees in Plant Biotechnology and Agricultural Education from the University of Illinois. Before becoming an AgriCorps Fellow, Clayton served as a state FFA officer and started his own business, “The Sweet Corn Shack.”