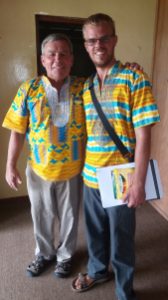 “Welcome! Welcome to Liberia!” This is a greeting that I heard many times during my five-day stay in Liberia to visit my son, Nathan, and his wife Anna. This was inevitably followed by a Liberian handshake; which involves a normal handshake, followed by a thumb grip, and ending with our two hands clasping with fingers cupped and our thumbs firmly behind the other’s middle finger. When the hands pull away quickly, te thumb and middle finger come together and snap. That is if you do it right. It took many practice attempts for me to get it right. But they patiently worked with me and smiled. They were always smiling. The greeting would almost always end with, “You are very welcome.” This was genuine. Nathan and Anna have made so many friends in Liberia that I must have gone through this routine 100 times. And each time they made me feel like they were happy that I was there. They made me feel welcome. 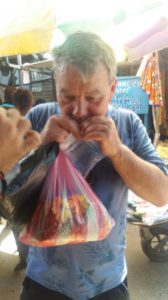 On my 24-hour trip home, I decided to write down a list of unique things about Liberia that I did not want to forget. My list grew to over 200 memories before I finally dozed off. Obviously, I cannot cover my entire list in this blog, so I have decided to concentrate on what impressed me the most; the people. I was told by a few Liberians that I met at the school that the people of Liberia were lazy. However, I did not find that to be the case, just the opposite. Everybody I saw was working hard to survive. Many people were selling something; fabric, toothbrushes, flip-flops, fresh meat, or vegetables. Families would walk miles to get to the markets with the products that they wanted to sell in baskets balanced on their head. I saw men standing on the side of the tar road (the only paved road through Liberia)dangling fish or a civet that they caught, hoping someone would stop and buy it.

Those that weren’t selling something were often in the transportation business. Taxies were old, manual-shift cars. Unless you are willing to buy out the other seats, if you hail a taxi they will have you wait until the car is filled. Filled, typically means seven to eight passengers in a five-passenger car. Sometimes passengers ride on the back of the car or the roof. Liberians call these the VIP seats. Some cars are used to haul products to the market. They will be packed to the ceiling with produce and there will be a four-foot stack of materials tied to the roof. Occasionally, you will see passengers riding on top of the stack. Then there are the motorcycles. They are everywhere. They dart in and out of traffic, often with two or three passengers behind the driver, or sometimes they will be carrying something like a mattress wedged between the driver and the passenger. This is a typical business day in Liberia. 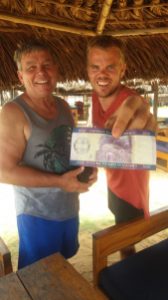 The heat and humidity in Liberia that I was warned about lived up to its billing. We have days like that in Maryland, but when I get too hot I just find air conditioning. You don’t have that luxury in Liberia. The combination of sweat, dirt from the dirt roads, and only a daily bucket bath, often left me feeling like the character Pig Pen in the Charley Brown comic strip. Yet, the Liberians always seemed fresh and clean. I think I figured out their secret. While driving down the tar road I saw numerous Liberians in the waterways along the road all day long, bathing, washing clothes, and washing their motorcycles. Some even hauling water on their heads back to their house which could be several km away. These are not lazy people. These are people that are finding a way to make it work under difficult circumstances. Liberia suffered through two horrific civil wars. As the second war ended and the country began to recover an Ebola epidemic broke out. These events not only caused many deaths, it isolated Liberia from the rest of the world. This has significantly stymied recovery. 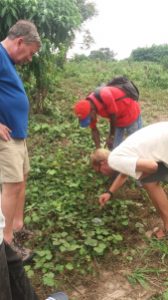 As an agriculturalist, I see Liberia as a fertile country that woefully under produces. Much of the food sold at markets is shipped in from neighboring countries. Many of the youth that I met strive to be politicians, preachers, or in the military; not farmers. Yet, only through improved food production can Liberia break the bonds of poverty. It will take volunteers, like Nathan and Anna, and organizations like AgriCorps to turn this around and get Liberia on the path toward sustainability.

When traveling through Liberia we would weave in and out of heavy traffic, avoiding people darting across the street with carts full of wares to sell and the large holes that peppered the roads. All this with no traffic lights, stop signs, or crosswalks. I felt a sense of accomplishment, and frankly relief, when we made it safely from point A to point B. But the Liberians have developed a strong sense of self-reliance and cooperation so they make it work. I met an outgoing, young man who was a student at Booker Washington Institute, where Nathan and Anna teach. Almost immediately after finishing our Liberian greeting, he told me that he was going to become President of Liberia one day. Imagine that, a society that allows an average citizen to realistically dream of becoming President. That sounds to me like the makings of a great nation.

This blog was written by Scott Glenn the father of Nathen Glenn, and AgriCorps Fellow working in Liberia.