I was roaming from class to class as I usually do during our routine morning break time of the school day. The air was filled with the sound of trampling feet rushing to the lunch line, the bouncing of soccer balls, and the mumble of varied conversation throughout the classrooms. During today’s morning break, I decided to check in with my Form 3 (9th grade) students. I entered the classroom as some of the students greeted me with their daily “Sir Sir, ete sen” (Sir, how are you?). As I replied, “me ho ye paa” (I am very well), one of the students quickly replied asking me to tell them about life in the U.S. I began to foretell a story about my experience in the United States, describing one of my experiences of growing up in an 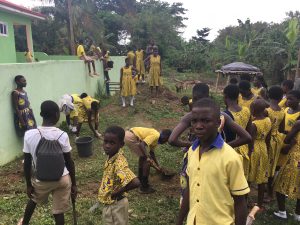 African American community in my youth. Some of the students were shocked that I didn’t live in a mansion or drive fancy cars around town during my upbringing in the United States. Though my experience was not a story of me growing up in the worst neighborhoods, I also did not grow up in the wealthiest of them either. I began to ask them why they thought I had to have such a lavish lifestyle? They told me how on TV and in the movies, all U.S residents owned these huge households and drove fancy cars. I soon realized that their mindset of life in the U.S was clouded by the single-story narrative. In a TED talk by novelist Chimamanda Adiche, she shared her thoughts on how a single-story narrative is created. “Show a people as one thing, as only one thing, over and over again, and that is what they become.” The single-story narrative is one that constantly tries to push us towards blanket statements and stereotypes. It is seen as an effort to easily understand people by putting them into a box or category, but, it further separates and causes more misunderstandings. Everywhere in the world, we are exposed to these single stories about a people group or country, and it is so easy to become complacent with the single story. This is much simpler and less taxing than identifying a different story for every facet of a group of people.

Upon my arrival to Ghana, I was also clouded by a single-story narrative that told me to expect Ghana to be a place of “beautiful landscapes, beautiful animals, and incomprehensible people” that desperately need my help in the realm of agriculture. In some ways this can be true, but there are many cases where it is not this way. For example, in my community we don’t have many vast landscapes or safari animals that we often expect from an African country. No zebras, giraffes, and thankfully no lions that terrorize my community in the night. While there are some people who can be very difficult to understand, due to obvious language barriers, there are many who speak great English. Ironically, from the perspective of my students even, I can be the incomprehensible one. As far as agricultural help, there are some areas of improvement that I have noticed while being here, but I have also met many farmers and noticed farms that have amazing operations that could even rival those in the U.S. 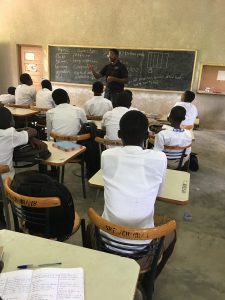 In some of the other fellows’ communities, they have heard, seen, and experienced stories and scenarios that are very different from my own. Some of the fellows get to live with homestay families that help to fold them into the way of life in their community. Another fellow even has the honor of staying with a chief, enabling him to see a perspective of community leadership. As for me, I get to stay in a compound owned by some of the elders in my community, allowing me to hear the stories of where my community has been, and how it is progressing today. Even though we are all in Ghana, and for some of us in the same region of Ghana, we all are having different experiences that can complement and contradict the experience of the other in one way or another. As my time continues in Ghana, I realize that the successes, failures, and experiences that occur in their community may or may not happen to me as well.

For those who have not had the privilege of coming to a country within the continent of Africa, they most likely have this single story clouding their view of Africa, or even what their thoughts are on my time in Ghana. So much more could be said about this topic, but for now I hope that through this year as AgriCorps Fellows, we are able to bring you many stories from Ghana and Liberia that will help to broaden your view of the “Ghanaian/Liberian experience.” Every country in Africa has different cultures and languages, and even within a single country the cultures and languages can widely vary. Like in the United States, you just have to hear the other sides of the story.