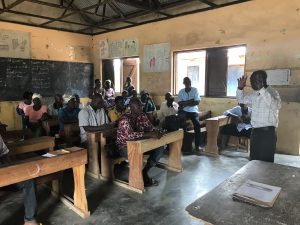 has been a MOFA agent for around 30 years and has worked in various regions throughout Ghana. He focuses on certifications for farmers in order to better market their produce. MOFA agents provide workshops to farmers in the surrounding territories on different topics within agriculture; for example, two workshops that I have attended were on “Conservation Agriculture” and “Farming as a Business”. Many farmers in Ghana use techniques such as “slash-and-burn” to clear their land before planting their next crops. Conservation agriculture practices, such as No-Till (no slash-and-burn) are being taught to farmers in order to maintain healthy soils, protect the environment, and produce larger yields for the years to come. Many farmers also do not keep records on their farms because they see it as an extra chore. Workshops through MOFA also designed to help farmers see the benefits of treating their farms as a business in order to maintain records and create larger profit margins. Both of these workshops seemed to be well received and have taught me skills and knowledge that I have been able to further share with the farmers in my community through more focused and personal farmer meetings.

One of my most proud moments as an extension agent was when I planned the first farmer meeting in my community. I was nervous that no one would show up and I changed the date and time the day before the original 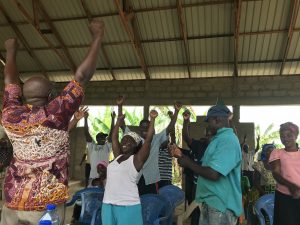 meeting in order for Mr. Mensah to speak about opportunities for farmers through MOFA. We were to start at 10am and by 9am that morning I had walked around the entire community reminding farmers of the meeting. My palms were sweaty and I could feel myself becoming nervous around 9:30am, but by the end of the two-hour session, there were 46 farmers present and engaged in the conversations! After introducing ourselves, we started talking about what the farmers needed within the community: cooperatives, more trainings, and marketing techniques were just a few that we came up with. Mr. Mensah was also able to register 20 farmers for a program within MOFA where farmers will get increased resources and trainings for their farm. So, a day that I was afraid would turn into around 5 farmers showing up an hour late, ended up being a great success. The farmers’ self-motivation and willingness to learn new things in order to increase production on their farms was the reason why it was successful.

Along with the district MOFA agents, I have had the opportunity to work with individual farmers in my community, 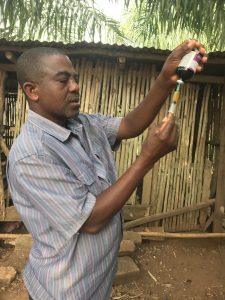 outside of the meetings. I have worked particularly close with one farmer, Mr. Dennis, on his animal farm. Dennis is the husband of the Assistant Head Mistress at my school and has pigs, broiler chickens, ducks, and goats. He also has crops such as cassava and maize, which are two of the most cultivated crops in Ghana. Most Monday mornings, I make rounds in the community to see farmers. One particular morning, I had planned on making a quick trip to check on Dennis and the farm and then go to work with Mr. Mensah in the office. I got to the farm and Dennis said, “today, we will be processing piglets.” Anyone who knows me knows that I will not pass up an opportunity to work with pigs, so of course, I asked if I could help. I was wearing a nice shirt and he told me that he did not want me to mess it up and get dirty, but sometimes, that’s what it’s all about. We processed around 30 piglets ranging from 2 days old to 2 months in about an hour, and it even provided me with an opportunity to teach about good quality assurance methods such as changing needles that are bent or dull and taking this time to monitor the animals for sicknesses or injuries.

I look forward to seeing the work that these farmers will accomplish because they definitely have the power and the will to do so. Working through Mr. Mensah and the other MOFA agents, as well as creating relationships with the farmers in my community and being able to learn from them is what makes working as an extension agent one of my favorite parts about being an AgriCorps Fellow.