The grass rustled in the breeze as I weaved my way through the bushes, carefully watching for snakes. The sun had gone down 45 minutes ago, but already the moonlight was bright enough to illuminate the narrow path before me. I walked up the small hill and the silhouette of the school came into focus before me. The scene was a familiar one as I had been teaching evening classes for several weeks, but something seemed different tonight. It was too quiet and eerily dark ahead. There wasn’t the typical activity of 20 students running in and out of the classroom as they played around before class started.

“If these students think they can get away with skipping evening class because I am teaching, they are fooling,” I thought to myself. “I am going to be so disappointed in them.” Form 3 (Grade 9), the only group required to attend evening class, is arguably my favorite. I have secret handshakes with them; they were the first Ghanaians to teach me anything substantial in Mfantse. They were usually engaged in class, asking tough questions, and had always said that they enjoyed my teaching; Therefore, their absence was a particular blow to my ego.

Feeling a little discouraged, I continued walking to the building just to check there were no stragglers waiting for me. 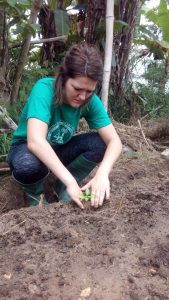 As I got closer, I saw figures moving in the classroom, lit up by a strange, dim white light.

“Madam Ellen,” Prince called, “the lights are finished. You do not have to teach tonight if you do not want to.”

The one light bulb the students rotate care of was plugged into the socket, but there was simply no light. Either someone had forgotten to pre-pay the light bill or there was a problem with the wiring, but either way, the only light in the room was coming from two small solar powered lights one of the girls had brought in. I knew the students would stay to study regardless of the lack of lights, so I tied my fate to theirs.

“Well, it looks like we will be learning in the dark tonight.” I said. The wheels began turning in my mind, trying to rapidly change my lesson plan until I realized it was simply too dark to do any of the activities I had planned. So I did what all of us Fellows are so good at, and adjusted.

Experiential learning is one of the best ways for students to retain information, but when that is off the table, sometimes all it takes is choosing to be present. I could have just left, but I didn’t. The students could have left, but instead they conjured up lights to complete their classes. And now, the students, who I first thought had ditched out on me, now expected me to leave them due to less than ideal circumstances. But lessons that we learn and teach are sometimes more than chalk on a blackboard. They are showing up when we don’t have to, being present when we could check out, and sticking around even in the darkest of times, literally and figuratively. So a night that I expected for none of my students to show up, they proved to me that sometimes, showing up is the most important of all.