March is known by people all over the world for college basketball. For me, March has always been rooted in academic madness. To my surprise, this year has been no different. Now that Easter break has begun, I finally get to reflect on the gifts March has given to me.

After the school semester started two weeks late due to registration issues, my classes began. The first week of classes I was left with reiterating class policies and procedures to students because every day I received new students. The college hasn’t had the luxury of consistent electricity throughout the school day so when I start my class at 1:00 pm, often the hottest hour of the day, students are tired and unfocused. Once registration calmed down, we were finally ready to begin. I am happy to say that I have a consistent set of about 25 students who show up to my senior leadership course. So far, we have been able to discuss why leadership is important, the different types of leadership, and how the course content fits in and outside of the borders of Liberia. I am hoping that when we get back to class, I will be able to start constructing my class in the model of a collegiate 4-H club. It is my hope that by teaching and facilitating learning through a 4-H club lens, students will feel more confident about starting and creating 4-H clubs in their home communities.

In my community, I have been working with a new 4-H club that has shown tremendous passion and excitement about their new club. Benedict, my county 4-H field officer and I met with Jinniepeleta Public School that serves students in grade K-6th, to help develop an action plan for the them, holding all those involved accountable for the success of the club. First, we decided to make a list of what Mr. Kokoleh, the schools Vice Principal of Instruction and Veronica, the 4-H club president, felt was necessary to be a successful club. These activities included leadership development, 4-H club meetings, and PTA involvement. We all agreed that these few events were a great first step to getting the 4-H club up and running. Then we established a step-by-step action plan that could allow amendments as time goes by. We all decided to make a list of our key stakeholders, which is mainly me, Benedict, the students, Mr. Kokoleh and the PTA. We also discussed a timeline in which all of this could be accomplished. This first step was speaking with the PTA. They were an integral part in making sure that the students’ educational careers were a success and if we could get them on board with understanding the importance of 4-H and agricultural education, then students would be more willing to commit.

Because of this action planning day, Jinniepeleta Public School has set up meetings to discuss their involvement in the 4-H club and set up dates to help the students learn about 4-H. So far, the students have memorized the vision, mission, motto, and pledge of 4-H Liberia. 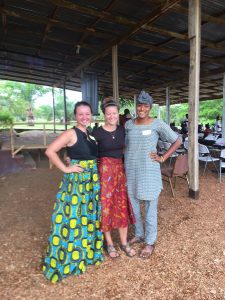 This month was also one of great learning. Liberia International Community College (LICC) in Ganta, Nimba invited the AgriCorps crew to an agribusiness workshop. The agriculture students partnered with the students of the University of Maryland’s (UMD) ROOTS club. Both the LICC students and UMD students were partnered with a student counterpart and each worked on parts of the value-added agribusiness workshop. It was a great show of partnership and cultural exchange between the students. It gave me hope for the young people of Liberia and inspired me to find ways for this type of exchange in my future agricultural classroom. The workshop talked about what agribusiness start-ups need to know before starting a business, like how to create a business plan and what revenue streams are.

One of the most amazing parts of my March was none other than the natural beauty of Mt. Nimba. Since the beginning of my service I heard many people talk about how they camped or hiked there and the pictures that people showed me to match their adventure were no less than spectacular. Anna Glenn, last year’s AgriCorps fellow 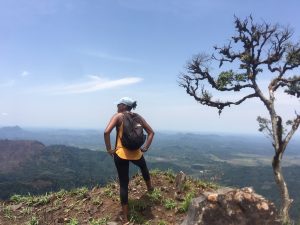 who now works with Hope in the Harvest, invited us to go with the mission team. This was an opportunity that we couldn’t pass up. We took a different hike than Anna originally planned but I think it was better than we could have imagined. Along the way we saw some fruit bats (not my favorite part; too musty but still cool!), and a quarry that people could swim in. The hike was difficult. Crawling over rugged slate and hiking up steep slopes. It was so worth it the work. Eventually, when we arrived at our destination, we were at the point where Liberia, Guinea and Ivory Coast meet. The actual site where the three points met didn’t compare to the sight we got to see during the 1,227 meter hike. It was amazing how green, raw, and pure the landscape was even after being recently burned from a rouge wildfire. The hike put things into perspective for me and certainly renewed my faith in myself to be resilient. I mean it was a 4-hour sloped hike and I took it like a champ, if I do say so myself. 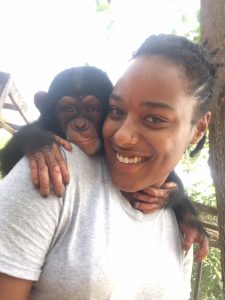 Lastly, the most magical part of my March was Samson. Samson is a baby chimpanzee that was rescued from the illegal poaching trade. He arrived at LICC just a few weeks before Megan and I arrived. At first when I saw him I was shocked; there was no way that this baby chimp sat before me, but he did. I took him out of the cage and we cuddle for what seemed like not a long enough time. We fed him bananas as anyone should and I think I even shed a tear and tried to rack my brain about how I could bring him home but quickly dismissed the thought because he’s a wild animal and I believe he should be in the wild with other chimpanzees. Even though I faced this mental dilemma, I sure was happy that my path met his. I’m pretty sure we made a bond that day. I know I did.

March was full of some maddening adventures and certainly something that I will not forget. My experience here in Liberia, as an AgriCorps Fellow has been like no other. As I come close to the end of my service, I am grateful to have met Samson (and other things too, but mostly Samson). I still have a few months left and I hope that I get to see Samson again, continue to help build Jinniepeleta, and show my students just how cool 4-H is and how it can impact the lives of young people, just how it has mine.

Sayvanna Sfabian received a bachelors degree in Animal Science from New York State College, Cobleskill and a masters in Agricultural Education from Cornell University. Before becoming an AgriCorps Fellow, Sayvanna spent several summers working on her family’s farm in the Dominican Republic.