Taking a break from packing my bags in preparation for Ghana, I head to an old wooden dock overlooking a pond on a West Texas ranch. I journey there alone to be alone in nature, alone with my thoughts, and to contemplate what will happen over the next few months. I feel a warm Texas breeze across my face, as a bullfrog croaks in the distance, and my only light is from the moon and million stars.

I am overtaken with a feeling of fear and excitement that grips my thoughts. A very similar feeling had a strangle hold over me a nearly a decade ago to the day. 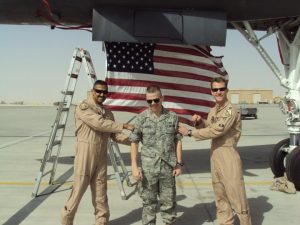 would be the first of many trips to the world’s biggest sand box. I struggled with overcoming the anxiety that seemed to be choking the pure thoughts out of me. I couldn’t loosen the grip it had on me. My family was thousands of miles away then, just as they are now. I had nobody that I was close enough with to talk about my fears. While I believed in God, I didn’t call him a friend. I was all alone. Just me to fight the fears, without anybody in front of me to pull me along, to hold me up beside me when I was falling, to give me a kick in the pants when I needed it. It wasn’t the fear of dying that I had, it was the fear of the unknown that clouded my thoughts and grasped my throat.

I’m a decade older this time around, and though I am still scrawny, I now have the tools in my quiver to combat that fear. Though my family is still half a country away I know they are supporting me, thinking of me, and praying for me. I have an amazing ring of brothers that I can call upon on a moment’s notice, and I know they will be there for me in a heartbeat. I have formed an incredible bond with those going with me, all of whom are experiencing similar feelings. I am also deeply rooted in my belief in Christ this time. I know that he is making a way through the unknown for me. He is clearing a path ahead of me. He will pull me forward, pick me up, and kick me in the backside so that I might get to where he wants me to go.

Justin Monroe is an Agribusiness graduate from The Ohio State University. Before serving as an AgriCorps Fellow Justin served in the U.S. Air Force.