There I was, sitting in the passenger seat of a small red sedan car, en route to my new home and family for the next couple days in Koforidua, Ghana. As I stared into the dark storm clouds in the distance through the car window, thoughts of excitement and curiosity were flooding my brain. I was on my way to living in a new culture, town, and host family. I was also thinking of the potential challenges that I will be facing when I get placed in a different community in the future and how I would approach those challenges. As the sedan pulled into the dirt driveway of the house, I noticed a child poking his head out of the wooden front door. This child had a beaming smile, one that instantly brightened my day. The boy’s name was Jophile, and he is a five-year old that became a role model for me. You’ll see why.

As I entered the house, I was immediately greeted by Jophile. There was something refreshing about seeing Jophile 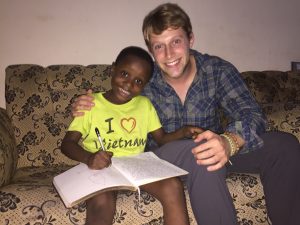 so happy and enthusiastic to meet me, a complete stranger to him. I couldn’t help but feed off of his energy as we spent hours playing soccer in his living room, riding bikes in the front yard, drawing pictures of each other, and showing me some of his super cool dance moves. Laughter filled the air with every activity. As the day came to a close, I started untying my boots and realized Jophile was staring at me. I made eye contact with him, then he asked how I tied my shoes. I was struck by the curiosity that Jophile had on how to tie shoes, so I offered him my first “Connor Shoe Tying Lesson”.

I went through the multiple steps of creating the “Loop de Doop” as Jophile would call it. The “Loop de Doop” was the final step after creating two loops and tying them into one knot. I had Jophile practice alongside me as I showed him my tips and tricks to becoming an official shoe tyer. Unfortunately, Jophile did not complete tying his shoes on Monday, Tuesday, or even Wednesday. Jophile could figure out every part of the shoe tying process except when it came to tying the two loops together, aka the “Loop de Doop”. He failed countless times, got upset, needed a break at times, but would ultimately come back and continue his attempt at tying his shoes to get the “Loop de Doop”. Jophile told me before I left the upcoming Friday morning that he would be able to tie his shoes all on his own. I could tell Jophile had a lot of heart and determination. 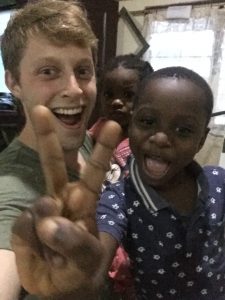 After a full day of training in the 4-H Ghana office, I came home to my host family to enjoy my last night with them. Jophile immediately ran through the front door and greeted me in the driveway, insisting that we started shoe-tying practice right then. After a couple minutes of intense shoe tying training, Jophile completed the “Loop de Doop”! He immediately filled the living room with laughter and his goofy dance moves. I couldn’t help but just to smile and laugh with Jophile. I’ve never seen someone so excited to tie their shoe. But this was much more than just tying shoes for Jophile. Jophile accepted a challenge, failed numerous times, persisted on continuing to tackle that challenge, and conquered the “Loop de Doop”.

The “Loop De Doop” reminds me life. We try over and over to align the strings in what seems to be the right order, but difficulties often get in the way of us tying the loops together. As humans, we experience difficulty having the motivation and energy to solve the “Loop de Doops” of life, especially after failing. Challenges can seem detrimental to our self-image, but we often fail to consider the positive outcomes of conquering these “Loop De Doops”. By facing new challenges, we present ourselves opportunities for self-development. To say the least, we all should strive to be a little bit more like Jophile. We always ought to seek out and continue solving the “Loop de Doops” of life.

Connor Lilles is an Agribusiness graduate from Fresno State University. Before serving as an AgriCorps Fellow Connor worked on an almond orchard and studied abroad in Italy.