Is foreign aid all bad? These days, it seems like almost everyone has something to say on the matter. Though I’ve personally maintained my silence for as long as I can suffer, today I will confess that I am no exception. Allow me to explain. I’ve spent the last 14 months living with, learning from, and imposing upon almost every Ghanaian willing to give me an audience. My hosts have ranged from street-side beggars who keep without making any promises, to governmental dignitaries infamous for making promises they can’t keep. Though I obviously have had a variety of interactions, the lion’s share of my experience rests in teaching agriculture and science to rural youth from the ages of 12 to 22. I’ve also been privileged to spend a lot of time with middle-aged, middle-class PhDs and professors at the nearby University of Cape Coast. As I’ve invested many hours into developing personal relationships with both professionals and students, I’ve come face-to-face with the influence foreign aid has had on these individuals.

When I began working with AgriCorps and 4-H Ghana, I didn’t have many expectations; in fact, I was warned against having any. My plan, like most long-term foreign volunteers, was to simply enter my community and begin to observe. The moment I was dropped off at the chief’s palace in Akatakyiwa, I eased myself into the slow pace of rural Ghanaian village life. The moment my career as a junior high teacher was launched, my mind began to fill with plans, obligations, and a host of frustrations associated with teaching unruly teenagers. I had learned that positive reinforcement was universally effective, but I was beginning to think my students were an exception. Gradually, however, I began to build friendships with a few of my students through conversations outside of class.

Many of the conversations were simple, some were nonsensical, and some told me stories from their childhood. One student’s 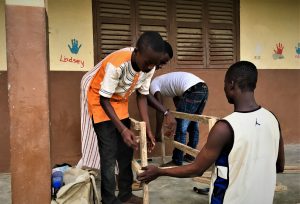 story I found to be quite shocking. It was told by a young man named Francis. All of the students and teachers knew Francis as one with relatively low academic potential. He—and others—would readily admit that his English wasn’t great, but Francis maintained a resoluteness to try, and try he did. On days when I sat under the tree outside the school building, preparing lesson notes, he would often engage me in conversation. It was one of these days that he began to tell me the story of his American friends. When Francis was in primary school, a large group of foreign volunteers came to Akatakyiwa for a few weeks with the mission of positively impacting the community members, particularly the young children. They spent many hours playing games with the children from the village, and each activity, of course, ended with a treat. One game that the volunteers seemed to really enjoy involved the children competing with one another to earn a bag of “goodies”, and with it the admiration—or envy—of their peers. Over the course of the weeks that the volunteers were in Akatakyiwa, Francis took every opportunity to interact with them and earn their love. Of course, they returned the affection and became all the more a source of joy for the young boy. As the foreigners’ time drew to a close, so did the fun, games, and treats. Naturally, none of the children wanted the fun to end, and the best opportunity for it to continue was to beg the volunteers to take them home with them to their country. The plea was met with the usual response of, “I would love to take you with me! I’ll come back soon, and when I do, maybe you can come!” Although this answer was meant to let the children down easy, to young Francis this meant that in a few months or next year, he would be going to the United States. With that, his newfound friends left, leaving behind a newly painted school building—painted handprints included—and Akatakyiwa’s next generation, eager with anticipation for the day their new friends would return. It would be soon, right! Right! Right?

Six years later, with the handprints and memories of the foreign volunteers faded, the anticipation and joy in the hearts of the young children have transformed into disappointment and a feeling of being forgotten. Were these the intentions of the volunteers? I certainly doubt it, but the outcome remains; nobody has returned, and no promises have been fulfilled. 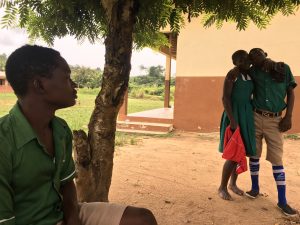 It would be nice to assume that such instances are very isolated—and in some instances they certainly are—but unfortunately, I’ve observed something very similar at the University of Cape Coast (UCC) and its outcome perhaps even more sinister. I met Dr. A in a boardroom one warm afternoon, accompanied by the Dean and a few other professors at UCC’s School of Agriculture. As we began to discuss potential collaboration between the university and NGOs investing in community development, Dr. A mentioned the potential that lay in his current research projects offering a type of demonstration space for trying improved agriculture methods. It wasn’t long before we were visiting his site and brainstorming ways in which we might incorporate his work into what AgriCorps was doing at the community level: training teachers, introducing hydroponics to schools, helping students develop their own gardens at home! One day as I’m sitting in Dr. A’s office, conversing with him about research projects in his department, I began to ask him about inter-departmental collaboration on research projects. His response was that since everybody was competing for different grant money from a variety of donors, there was minimal collaboration among departments, much less schools within the College. One of the causes of frustration lay in what he referred to people and organizations who “want to just check a box”. I asked him to elaborate. Dr. A began to explain how numerous times, foreign organizations arrive with no prior notice, wanting time, energy, signatures, or a combination of all three. They arrive with an agenda and a set of boxes to check, perhaps some monies to award to projects, and then as quickly as they arrive, they leave, often without being heard from again. Again, were these to be isolate instances, it would be of little concern; however, the way that it was described by Dr. A made it clear that this is a constant process. “They come, they talk, we listen, and then they go.” What makes this foreign “intervention” so dangerous is that it has sometimes resulted in interdepartmental disagreements in the case of money being awarded for projects to departments that ascribe to a particular discipline. Over time this has caused deep divisions between departments within the School of Agriculture and even more severe tensions among the schools within the College of Agriculture and Natural Sciences.

Taking my relatively short experience in Ghana these last 14 months, I’ve seen many foreigners like myself come and go, seeking some sort of impact. There’s no doubt that each interaction leaves a certain impact; as to whether that impact is good or bad, we often don’t wait around long enough to find out.

So what do we do? For one, before offering solutions, make sure that there is a problem. That 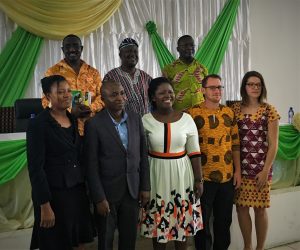 means asking people, not data. Second, we ought not make promises that we don’t seriously intend to fill. False hope generated during emotionally charged instances (like tearful goodbyes) can cause long-term damage when left unfulfilled. The last thing I will mention—and perhaps the most important—is to remember that though you may not suffer the consequences of selfish acts of “selflessness” done in a developing country, people that live there do. Don’t think less of yourself as you seek to serve, simply do your best to think of yourself less. Francis and Dr. A would perhaps thank you for that.